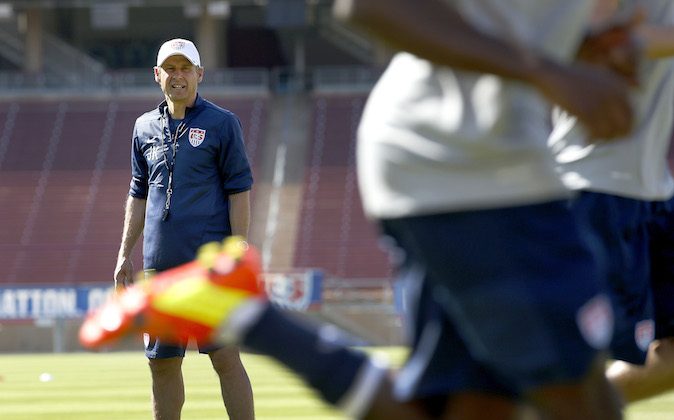 U.S. men's soccer coach Jurgen Klinsmann watches players warm up during a training session Wednesday, May 14, 2014, in Stanford, Calif. The team began a two-week training camp leading up to a May 27 exhibition with Azerbaijan at San Francisco's Candlestick Park. (AP Photo/Tony Avelar)
Soccer

The USA vs Azerbaijan soccer international friendly match is set for Tuesday, March 27.

The game will be broadcast on UniMás, ESPN2, and Univision Deportes in the United States.

The game will also air on Idman TV in Azerbaijan.

Here is an AP article on Azerbaijan coach and US scout Berti Vogts.

Berti Vogts Coaches Azerbaijan, Then Scouts for US

As soon as he’s done coaching Azerbaijan against the Americans in a World Cup warmup Tuesday night, Vogts will immediately return to his other important soccer gig: scouting U.S. World Cup opponents as a special adviser to Jurgen Klinsmann.

Only in soccer could Vogts pull this unique scenario — guiding one team, then rejoining the other in the lead-up to Brazil.

“I’ve never seen or heard that before,” U.S. midfielder Graham Zusi said. “That’s just the way it is sometimes.”

Vogts expects about half of Azerbaijan’s 9 million people to be watching the game on TV when it will be 7 a.m. in the former Soviet republic, 12 hours ahead. The match at Candlestick Park is the first of three World Cup warmups for the U.S. stateside before departing for Sao Paulo.

Not that Vogts is getting ahead of himself.

“First, I’m the national coach for Azerbaijan. Proud to play here against the United States,” Vogts said. “Azerbaijan is a very, very small country. More Azerbaijans are looking forward for this match.

“It’s a huge match for Azerbaijan, and I hope the match also will help the United States. It’s the first match, then they play against Turkey in New York and in Jacksonville against Nigeria. It’s very interesting matches for the U.S.”

He is quick to clear up a couple of things: Klinsmann hasn’t asked him to make any tactical adjustments based on better preparing the U.S. even though his team has faced all three World Cup opponents, and Klinsmann only offered the idea of this match and Vogts agreed while feeling no pressure to oblige.

“It’s a friendly. It’s a natural match. It’s not a match about two friends. It’s a match of Azerbaijan-USA,” Vogts said. “Azerbaijan inhabitants have about 8 million, and maybe 4 million are waiting for the match against the big USA.”

For Klinsmann, facing a team not among the top in the world at this stage — Azerbaijan is 85th — is ideal.

“There’s a purpose behind choosing Azerbaijan. It’s a team that has met with a lot of the European opponents that we actually face,” Klinsmann said before a public training Monday. “We had strong preparation the last 12 days. We did a lot of physical work, obviously, so the legs might be a little bit heavier.

“I think they will give us a very good game. It’s important to start with a win in the sendoff series and build confidence and see where the guys are right now after that intense two weeks.”

Klinsmann called upon Vogts in March, when he shook up his coaching staff just more than two months before the World Cup.

“For me he’s been a big mentor throughout my life, and he just has an outstanding soccer brain, an outstanding knowledge the way he reads the game, the way he analyzes things with his tremendous experience he has, is unquestionable, a huge benefit for us.”

After Tuesday, Vogts will endure a whirlwind stretch of travel and scouting.

He returns to Germany with Azerbaijan. Then he will drive to Rotterdam to see Saturday’s exhibition between Ghana and the Netherlands. The following day it’s Cameroon and Germany in Moechengladbach.

“Then I come over to Boston and watch Portugal against Mexico, then I go to Jacksonville to be part of the (U.S.) team, then I stay two days longer in Miami and watch Ghana against South Korea,” Vogts said.

The Americans will head from the Bay Area to the East Coast. On Sunday, they play Turkey at Harrison, New Jersey, followed by a game with Nigeria six days later in Jacksonville, Florida.

The U.S. will then travel to the squad’s base camp in Sao Paulo to prepare for its Group G opener against Ghana on June 16 at Natal.

“I think we’ll be experimenting through this process and trying to figure out what that best 11’s going to be,” captain Clint Dempsey said.

“Where’s Landon?” one fan hollered as the Americans took the field, then Klinsmann waved to the cheering crowd of about 1,000 on a blustery Memorial Day evening.

Vogts is perfectly content to contribute behind the scenes, without getting involved in personnel decisions or weighing in on Klinsmann’s choice to leave Donovan home.

“I think it’s a good group together, the U.S.,” he said. “I’m not a coach. Maybe Jurgen has some questions for me about special things. I give him a clear answer. That is my part.”

NOTES: Klinsmann was mum who would wear No. 10 against Azerbaijan. “I’m going to ask the equipment manager. That’s his job,” Klinsmann said, smiling. “We want to keep that quiet for another day.” … While he plans to use all six substitutes during the exhibitions, Klinsmann hinted he might use close to the same lineup for the World Cup opener. “We also want to see a flow in our game with a lineup that looks in our eyes very strong, and kind of very close to the one we’ll see three weeks down the road,” he said.