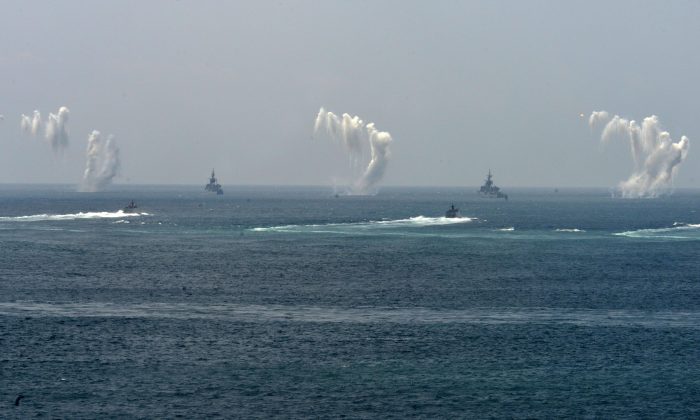 Smoke rises from the sea to mark electronic counter-measures (ECM) during the "Han Kuang" (Han Glory) life-fire drill, some 7 kms (4 miles) from the city of Magong on the outlying Penghu islands on May 25, 2017. (SAM YEH/AFP/Getty Images)
Asia & Pacific

US Said to Weigh New Warship Passage Through Taiwan Strait

The United States is considering a new operation to send warships through the Taiwan Strait, U.S. officials told Reuters, a mission aimed at ensuring free passage through the strategic waterway but which risks heightening tensions with the Chinese regime.

The U.S. Navy conducted a similar mission in the strait’s international waters in July and any repeat would be seen in self-ruled Taiwan as a fresh expression of support by U.S. President Donald Trump’s government.

The U.S. military declined to comment and U.S. officials who discussed the deliberations, which have not been previously reported, did so on condition of anonymity. They did not discuss the potential timing for any fresh passage through the strait.

China views Taiwan as a wayward province and has been ramping up the pressure to assert its sovereignty over the island. It raised concerns over U.S. policy toward Taiwan in talks this week with U.S. Defense Secretary Jim Mattis in Singapore.

Even as Washington mulls ordering a fresh passage through the strait, it has been trying to explain to Beijing that its policies toward Taiwan are unchanged.

Mattis delivered that message to China‘s Defense Minister Wei Fenghe personally on Oct. 18, on the sidelines of an Asian security forum.

“Minister Wei raised Taiwan and concerns about our policy. The Secretary reassured Minister Wei that we haven’t changed our Taiwan policy, our one China policy,” said Randall Schriver, a U.S. assistant secretary of defense who helps guide Pentagon policy in Asia.

Taiwan is only one of a growing number of flashpoints in the U.S.-China relationship, which also include a bitter trade war, U.S. sanctions, and the Chinese regime’s increasingly muscular military posture in the South China Sea.

Mattis told Wei on Thursday that the world’s two largest economies needed to deepen high-level military ties so as to navigate tension and rein in the risk of inadvertent conflict.

Some current and former U.S. officials say U.S. warship passages in the Taiwan Strait are still too infrequent and note that a U.S. aircraft carrier hasn’t transited the Taiwan Strait since 2007, during the administration of George W. Bush.

When the last two U.S. warships, both destroyers, sailed through the Taiwan Strait in July, it was the first such operation in about a year.

Beijing, which has never renounced the use of force to bring Taiwan under its control, responded to the July passage angrily, accusing the United States of threatening stability in the strategic waterway.

It has also viewed U.S. overtures toward Taiwan with alarm, including its unveiling a new de facto embassy in Taiwan and passage of the Taiwan Travel Act, which encourages U.S. officials to visit the island.

Military experts say the balance of power between Taiwan and China has shifted decisively in China‘s favor in recent years, and the Chinese regime could easily overwhelm the island unless U.S. forces came quickly to Taiwan’s aid.

The Chinese regime has also alarmed Taiwan by ramping up military exercises this year, including flying bombers and other military aircraft around the island and sending its aircraft carrier through the narrow Taiwan Strait separating it from Taiwan.

Taiwan’s President Tsai Ing-wen said last week the island will increase its defense budget every year to ensure it can defend its sovereignty, including resuming domestic development of advanced training aircraft and submarines.

“At this time, China‘s intimidation and diplomatic pressure not only hurt relations between both sides but seriously challenges the peaceful stability in the Taiwan Strait,” she said in a National Day speech in Taipei on Oct. 10.

Her remarks came ahead of island-wide local elections in late November that are seen as a bellwether for her ruling party’s performance in presidential elections due in 2020.