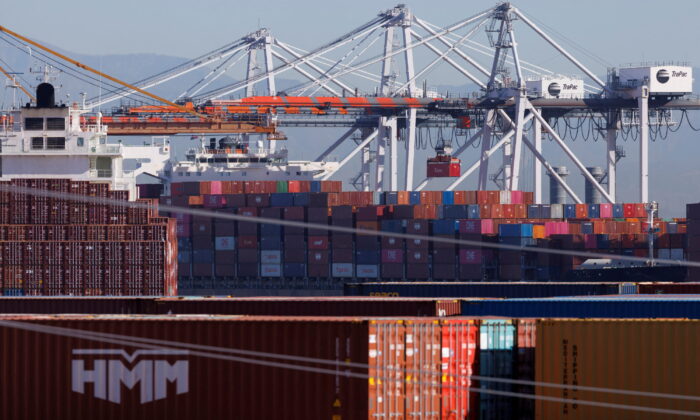 Stacked containers are shown as ships unload their cargo at the Port of Los Angeles in Los Angeles, Calif., on Nov. 22, 2021. (Mike Blake/Reuters)
Economy

US Trade Deficit Narrows in May; Exports Hit Record High

WASHINGTON—The U.S. trade deficit narrowed in May as slowing domestic demand amid rising interest rates curbed imports, which could see trade contributing to economic growth in the second quarter after being a drag for nearly two years.

The Commerce Department said on Thursday that the trade deficit declined 1.3 percent to $85.5 billion. Imports of goods and services rose 0.6 percent, which was offset by a 1.2 percent increase in exports to a record high.

Imports of goods rose 0.1 percent, while services scaled a record high. Goods exports shot up 1.7 percent to an all-time. Exports of services were also the highest on record.

The Federal Reserve has increased its benchmark overnight interest rate by 150 basis points since March as it seeks to cool domestic demand to lower inflation. A record trade deficit weighed on the economy in the first quarter, resulting in gross domestic product declining at a 1.6 percent annualized rate. Trade has subtracted from GDP for seven straight quarters.