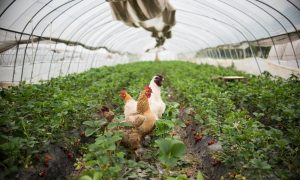 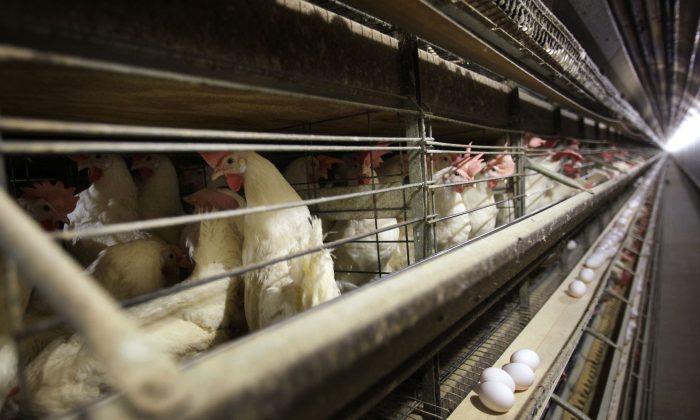 Chickens are in cages at a farm near Stuart, Iowa, in this file photo. (AP Photo/Charlie Neibergall)
US

US to Import Egg Products From Netherlands to Ease Shortage

DES MOINES, Iowa—With an increasing egg shortage due to the widespread bird flu outbreak, the United States will soon allow imported egg products from the Netherlands to be used for commercial baking and in processed foods.

It’s the first time in more than a decade the United States has bought eggs from a European nation, and comes as consumers are seeing a surge in shell egg prices and a Texas-based supermarket began limiting purchases.

Generally, the United States produces enough eggs to meet domestic supply and export more than 30 million dozen eggs a month to trade partners including Mexico and Canada, the largest buyers. But the H5N2 virus—which began to spread widely through Midwest farms in the early spring, including in Iowa, the nation’s largest egg producer—has left nearly 47 million birds dead or dying.

About 35 million were egg-laying hens that provided 80 percent of the eggs for the breaker market—eggs broken then liquefied, dried, or frozen to be used in processed foods like mayonnaise and pancake mixes or sold to bakeries to make cakes, cookies, and other products. Because there are fewer chickens laying eggs, a third of the supply for companies buying egg products has disappeared in just a few weeks.

“Our members are not able to get their hands on enough eggs to continue their production. It’s very much a crisis for us right now,” said Cory Martin, director of government relations for the American Bakers Association, a trade group representing wholesale bakeries including cookie and cracker maker Pepperidge Farm, Krispy Kreme Doughnut Corp., and White Plains, New York-based Linden’s Cookies.

Prices for egg products used by food manufacturers and bakeries jumped more than 200 percent in the past month, and even large bakeries have been forced to buy eggs by the carton and crack them individually to continue production, Martin said.

It’s the first time in more than a decade the U.S. has bought eggs from a European nation.

Only Canada has been certified to sell liquid, dried, and frozen egg products to U.S. companies in recent years. But with manufacturers scrambling, the USDA’s Food Safety and Inspection Service, which oversees importation of egg products, announced last week the Netherlands again had been approved to export to the United States—something it hasn’t done since 2002.

“Through a rigorous process of verification by FSIS of The Netherlands government inspection system, FSIS has determined that the country’s food safety system continues to be equivalent to that of the U.S., which ensures that product is safe, wholesome, and properly labeled,” the federal agency said in a statement.

Five egg processors in the Netherlands, which had been approved initially in 1987 but saw its certification expire, will begin selling to U.S. companies as soon as export certificate language details can be worked out, FSIS spokesman Adam Tarr said. That’s expected to happen within a few days.

Seven countries have been approved to import shell eggs to be cracked and used by bakeries and food processors, according to the Agriculture Marketing Service: Chile, Argentina, France, Germany, the Netherlands, Spain, and Portugal. But the supply issue isn’t likely to go away quickly, Martin said, noting the bakers association is encouraging the government to approve additional trade partners.

“I’ve been told by the producers it may take up to two years to get back up and running to where they were before they got hit with the flu,” he said.

In an effort to discourage commercial buyers from stocking up, Texas-based grocery store chain H-E-B has limited egg purchases to three cartons per customer.

“H-E-B is committed to ensuring Texas families and households have access to eggs, our eggs are not for commercial sale,” the company said in a statement. “The signs placed on our shelves last week are to deter commercial users from buying eggs in bulk.”

Meanwhile, shoppers saw the price of a carton of large eggs shoot up more than 120 percent in a month—on average, above $2.60 a dozen, according to Urner Barry, a commodities reporting firm.

The higher prices have driven some consumers to buy specialty eggs including cage-free and organic, which typically cost more but haven’t seen a similar increase because specialty-egg chicken houses haven’t been hit as hard, Urner Barry egg industry analyst Brian Moscogiuri said. He noted that specialty-egg prices are closer to regular eggs, leading some consumers to justify the purchase.

State and federal officials believe the bird flu virus will die off in the Midwest once temperatures remain consistently in the 80s. The frequency of new cases appears to have slowed.