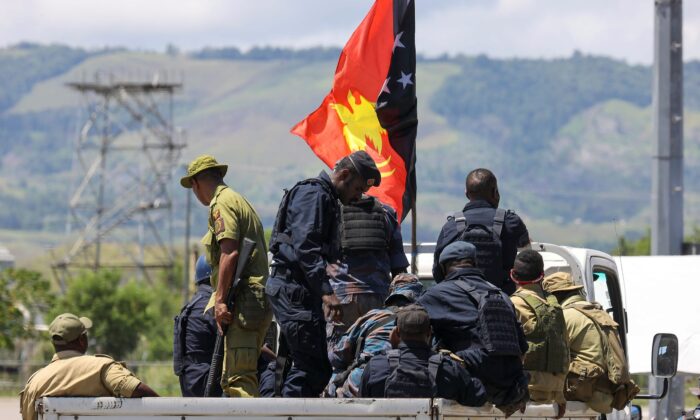 Papua New Guinea police arrive at the airport in Honiara, Solomon Islands, on Nov. 27, 2021. (Gary Ramage via AP)
US News

The United States will seek to increase security ties with Pacific nation Papua New Guinea (PNG)—Australia’s northern neighbour—amid the fallout of a freshly minted agreement between Beijing and the Solomon Islands that could see Chinese troops and weapons stationed in the region.

Daniel Kritenbrink, the assistant secretary of state of East Asian and Pacific Affairs, told reporters on April 26 that further discussions with PNG Prime Minister James Marape would be held in the coming months, according to comments obtained by Reuters.

“There is a desire on both sides to ensure we take concrete steps to expand our security cooperation,” he told reporters in a call.

Kritenbrink said Solomon Islands Prime Minister Manasseh Sogavare had given assurances that the security deal with the Chinese Communist Party (CCP) would only be for domestic security needs and that there would be no military base.

However, opposition leader of the Solomons, Matthew Wale, has previously panned the claim, saying the nation had no serious internal security threats and accused Sogavare of planning to escalate “his struggle with Malaita (Province).”

Sogavare’s government has been at odds with the leader of Malaita, Daniel Suidani, over a 2019 decision to switch the Solomon Islands’ diplomatic ties from Taiwan to Beijing. Suidani has stood firm on keeping relations with Taiwan much to the chagrin of the prime minister.

The issue came to a head in November last year when riots erupted in the Solomons capital Honiara, which saw the Chinatown district razed and resulted in three deaths.

Kritenbrink meanwhile also said neighbouring Pacific nations were concerned about the implications of the “Security Cooperation between the Solomon Islands and the People’s Republic of China (PRC).”

“We do know that the PRC is seeking to establish a more robust overseas logistics and basing infrastructure that would allow the People’s Liberation Army to project and sustain military power at greater distances,” he said in reference to the Chinese military.

Experts have warned that a fully implemented security deal between the Solomon Islands and Beijing could lead to similar geopolitical tensions in the region akin to the South China Sea. The Solomons was the site of extensive fighting during World War II—the Battle of Guadalcanal—because of its critical position and influence over vital sea lanes.

“Do you think there’s not the same pressure going on in PNG that there is in the Solomon Islands? Of course, there is. That is happening in all of those countries,” he told reporters on April 20.

Beijing has previously shown interest in the autonomous region of Bougainville in the PNG, reportedly offering US$1 billion in infrastructure investment in the area under the banner of the Belt and Road Initiative. Bougainville is also on course to achieve independence from PNG by 2027.

In 2018, the CCP also offered to redevelop a naval base in PNG but lost out to a deal with Australia and the United States.

Morrison meanwhile, has also warned of the challenges of competing with Beijing for influence in the region.

“We are concerned for all of the countries in the region,” he told Radio 2GB on April 26. “There are 20 Pacific Island foreign nations … there are 20 areas which we’re looking to ensure we counter that (CCP) influence.”

“We’re the only country in the world to have an embassy in every single one of those Pacific island nations,” he added. “So it’s an area which is tightly contested, and we’ve always been heavily forward-leaning. But we’re dealing with the Chinese government that doesn’t play by the same rules.”