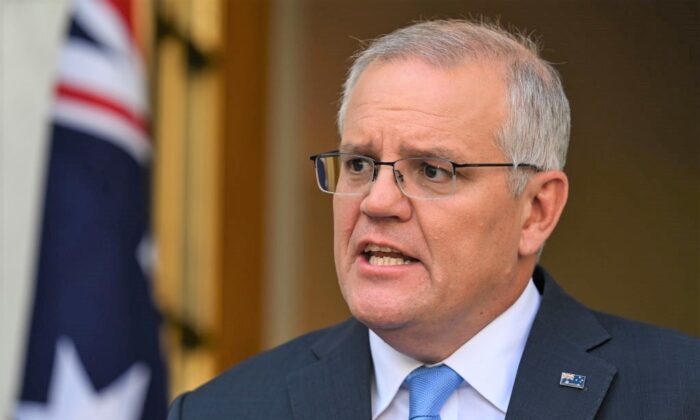 Papua New Guinea Could Be Next Target for Beijing Security Pact: Australian PM

The Australian prime minister has hinted that neighbouring Pacific nation Papua New Guinea has faced similar “pressure” from Beijing to consent to a security agreement like the Solomon Islands.

Prime Minister Scott Morrison has been busy defending Australia’s engagement with the South Pacific after the Chinese Foreign Ministry confirmed on April 19 that it had “officially signed” a security pact that could open the door for the Chinese Communist Party (CCP) to station troops and weapons in the Solomon Islands.

Defence experts warn the move could lead to gradual militarisation of the region akin to the South China Sea and extend the reach of the People’s Liberation Army to within 1,700 kilometres of Australia’s northern city of Cairns.

Morrison, who has been on the campaign trail, defended the approach of his government in dealing with Solomon Islands Prime Minister Manasseh Sogavare—treading a fine line between respecting the country’s sovereignty and dissuading it from engaging with Beijing.

“[We] made very clear that Australia was not looking to go and stamp around, that we were going to deal with it constructively and respectfully,” he told reporters on April 20. “We keep reenforcing to all our Pacific family that will always be there for you in your interests and that is what we believe will ultimately prevail.

“Do you think there’s not the same pressure going on in Papua New Guinea that there is in the Solomon Islands? Of course there is. That is happening in all of those countries.”

Beijing has previously shown interest in the autonomous region of Bougainville in Papua New Guinea (PNG), reportedly offering US$1 billion in infrastructure investment that would come under its Belt and Road Initiative. Bougainville is also on course to achieve independence from PNG by 2027.

The Morrison government has been criticised by the Labor Party opposition for dropping the ball on engagement in the South Pacific, with ministers citing a lack of action on climate change as well as cuts to aid.

Opposition leader Anthony Albanese pledged to visit the Solomons if he wins government.

“I would be engaging with the leadership of the Solomons. And I would have done it over a period of time,” Albanese told reporters in Queensland. “The problem is those relationships aren’t ones that can be done just during when there’s a crisis.”

Meanwhile, provincial leaders in the Solomons, as well as national opposition leader Matthew Wale, have been vocal in their criticism of the security deal.

“All the drivers of instability, insecurity and even threats to national unity in Solomon Islands are entirely internal,” Wale said in a statement obtained by The Epoch Times.

He called Solomons Prime Minister Manasseh Sogavare a “mercenary” of Beijing, and that Sogavare had longed for the day he could “exact revenge” on Australia—the prime minister has been a long-time critic of Australia’s involvement in the region, claiming it has been engaging in “colonialism.”

Wale said: “That day [of vengeance] has arrived, and he [Sogavare] has gladly thrust his sword into Australia’s back. China is only too happy to oblige Prime Minister Sogavare, there is a meeting of minds on this.”

In a few days, U.S. Indo-Pacific coordinator Kurt Campbell is due to touch down in the Solomon Islands to speak with the prime minister, which comes after Australian foreign affairs officials, the presiding Pacific Minister Zed Seselja, and two heads of intelligence all met with Sogavare urging him to call off the deal.