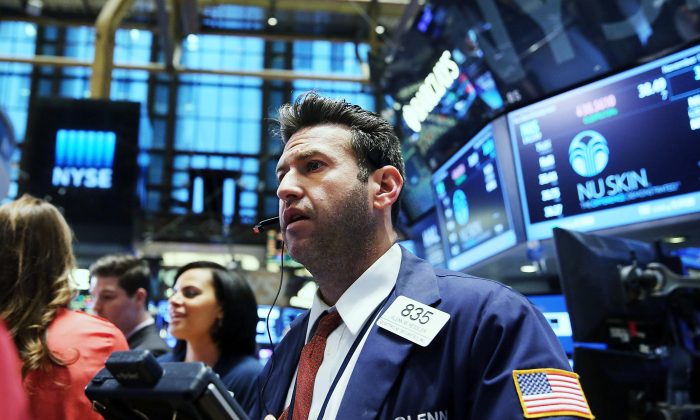 Traders work on the floor of the New York Stock Exchange (NYSE) on Nov. 18, 2014 in New York City. US financial markets were mixed in early trading Thursday, Nov. 20, 2014, as soft economic data out of China and Europe stoked concerns about a global slowdown. (Spencer Platt/Getty Images)
Business & Markets

US Stock Market Back Up to Record Highs

It was the second record-high close for the Dow this week and the third for the S&P 500. The modest gains erased losses from the day before, pushing the three major stock indexes further ahead for the week.

Good news on housing, the job market and another dash of strong corporate earnings helped drive stocks higher, reversing a decline earlier in the day. Energy stocks led the gainers in the S&P 500 as oil prices rose.

Discouraging economic data out of Europe and China stoked worries of a global economic slowdown and sent stocks lower in early trading. But investors shrugged off those concerns, reassured by a batch of positive U.S. economic reports.

Traders also drew encouragement from retailers including Best Buy, Dollar Tree and Kirkland’s, which reported better-than-expected earnings. Third-quarter earnings for companies in the S&P 500 are at an all-time high.

“That’s a signal for investors that the fundamentals are solid behind this market,” Cote said.

The major stock indexes were moving lower early Thursday, then spent much of the morning drifting between tiny gains and losses. They turned higher around midmorning, as the market digested the news on housing.

Sales of previously occupied homes increased in October on an annual basis for the first time this year, according to the National Association of Realtors. The report helped lift the stock prices of many homebuilders. William Lyon Homes led the gainers, adding 97 cents, or 5 percent, to $20.23.

Meanwhile, the Labor Department said applications for unemployment benefits fell slightly last week to a seasonally adjusted 291,000. The applications, which are a proxy for layoffs, have fallen 16 percent in the past 12 months.

Also on Thursday, the Federal Reserve Bank of Philadelphia said its regional manufacturing index rose to the highest level since 1993, adding to other recent evidence that U.S. manufacturing is expanding modestly and helping boost economic growth.

That data offset worries over the 18-country eurozone, where a broad gauge of business activity fell this month to a 16-month low. In China, a preliminary survey showed manufacturing in the world’s second-largest economy slid to a six-month low this month.

While a concern, the global economic picture has taken a back seat to corporate earnings and the improving job market and economy in the U.S. and emerging markets.

“We’re coming off an earnings season that has been very strong, with 80 percent of companies beating on the top line and around 55 percent beating on the bottom line,” noted Tony Roth, chief investment officer at Wilmington Trust.

Six of the 10 sectors in the S&P 500 index ended higher, led by energy stocks. The telecommunications sector fell the most. Among individual stocks, Keurig Green Mountain fell the most, declining $11.45, or 7.4 percent, to $142.50.

Among other stocks making big moves: