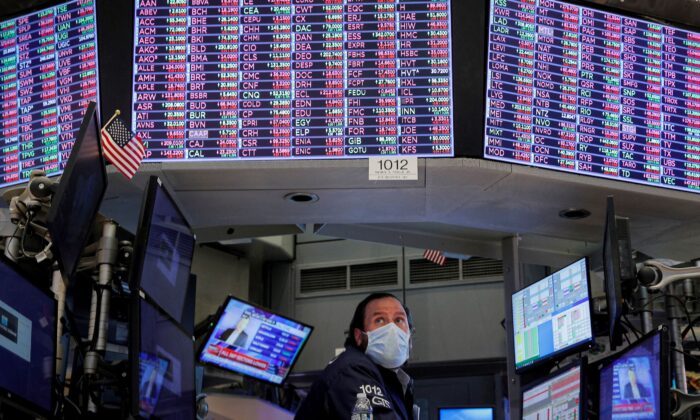 A specialist trader works inside a booth on the floor of the New York Stock Exchange (NYSE) in New York City, on Jan. 18, 2022. (Brendan McDermid/Reuters)
Stocks

US Stock Indexes Bounce Back on Strong Earnings

U.S. stock indexes rose on Wednesday after upbeat results from a host of companies partially offset a wobbly start to the fourth-quarter reporting season, while Big Tech stocks also made a comeback after a bruising selloff.

Quarterly reports from UnitedHealth Group Inc. and Procter & Gamble Co. supported sentiment in early trading, while Bank of America Corp. and Morgan Stanley wrapped up earnings from big lenders on a positive note.

“Stocks were getting hit last quarter even though they beat estimates, which tells me that their prices were inflated,” said Joe Saluzzi, co-manager of trading at Themis Trading in New Jersey.

“Now that we’ve seen a bit of a sell off, when a company reports better-than-expected earnings, they should get a price rise as opposed to last quarter.”

All of the 11 major S&P 500 sector indexes were higher, with battered technology stocks rising 0.9 percent.

Procter & Gamble gained 3.8 percent as it raised its annual sales forecast, benefiting from resurgent demand for cleaning products due to a spike in COVID-19 infections.

Earnings from S&P 500 companies are expected to grow 23.1 percent year-over-year in the fourth quarter, according to IBES estimates from Refinitiv.

The Nasdaq index came a hair’s breadth away from confirming a 10 percent correction at the close on Tuesday, having lost 9.7 percent from its Nov. 19 record closing high.

United Airlines fell 0.6 percent ahead of its fourth-quarter results after markets close.