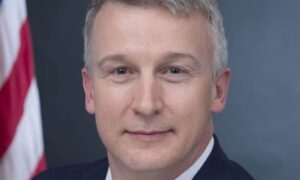 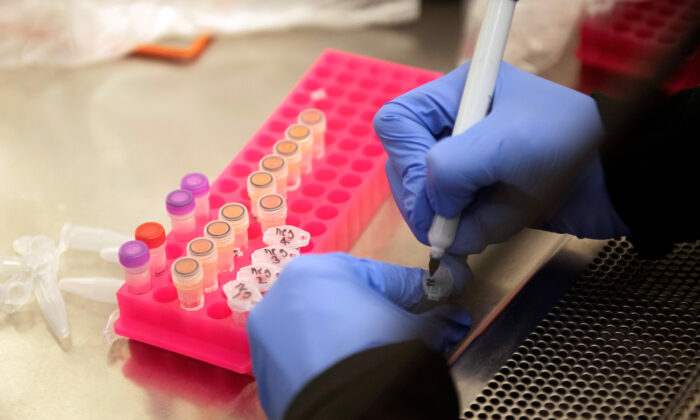 Researchers at the Microbiology Research Facility work with CCP virus samples as a trial begins to see whether hydroxychloroquine can prevent or reduce the severity of COVID-19, at the University of Minnesota in Minneapolis, Minnesota, on March 19, 2020. (Reuters/Craig Lassig)
AMERICA

US States Build Stockpiles of Hydroxychloroquine

State and local governments across the United States have obtained about 30 million doses of hydroxychloroquine, a malaria drug being studied in countries around the world for safety and efficacy against COVID-19.

At least 22 states and the District of Columbia secured shipments of the drug, according to information compiled from state and federal officials. Sixteen of those states were won by President Donald Trump in 2016, although five of them, including North Carolina and Louisiana, are now led by Democratic governors.

The use of the drug became a political issue when Trump, reviled by critics but admired by supporters, began touting it last month, suggesting it was approved for use against COVID-19, the disease caused by the CCP (Chinese Communist Party) virus, a novel coronavirus that emerged from mainland China last year.

Supporters say having a supply on hand makes sense in case the drug is shown to be effective against the pandemic that has devastated the global economy and killed nearly 200,000 people worldwide, and to ensure a steady supply for people who need it for other conditions like lupus.

But some health experts say having the drug on hand could make it easier to misuse it. The Food and Drug Administration (FDA) warned on Friday against using hydroxychloroquine or the closely related chloroquine outside of hospitals or clinical trials because of side effects, including some related to the heart, citing case reports, medical literature, and incidents recorded by the American Association of Poison Control Centers National Poison Data System.

A National Institutes of Health panel also said this week that hydroxychloroquine shouldn’t be used with azithromycin, an antibiotic known as Z-Pak. There’s insufficient clinical data to recommend for against the use of hydroxychloroquine or chloroquine alone, it said.

Oklahoma spent $2 million to buy the drugs, and Utah and Ohio have spent hundreds of thousands on purchases. The rest of the cities and states received free shipments from drug companies or the U.S. government over the last month. Ohio received a large donation from a local company.

Several states including New York, Connecticut, Oregon, Louisiana, North Carolina, and Texas received donations of the medication from a private company based in New Jersey called Amneal Pharmaceuticals. Florida was given one million doses from Israeli company Teva Pharmaceuticals.

Pharmaceutical companies can often manufacture pills they already make fairly cheaply. The donations may have been done to earn good publicity while setting it up to make future sales if hydroxychloroquine ends up being a reliable treatment for the virus, said Dr. Kenneth Klein, a consultant from outside of Seattle who has spent the last three decades working for drug companies to design and evaluate their clinical trials.

The Federal Emergency Management Agency said Friday it has sent out 14.4 million doses of hydroxychloroquine to 14 cities, including Washington, D.C., Philadelphia, and Baltimore, from the federal government’s national stockpile, a source that also provided South Dakota and California with supplies.

The U.S. government secured a donation of 30 million doses from Swiss drugmaker Novartis on March 29 to build up the stockpile, which does not normally stock the drug, while Bayer donated one million doses of chloroquine.

“President Trump is taking every possible step to protect Americans from the coronavirus and provide them with hope,” said Health and Human Services Secretary Alex Azar in a statement at the time. “Scientists in America and around the world have identified multiple potential therapeutics for COVID-19, including chloroquine and hydroxychloroquine.”

After the 31 million doses were obtained in late March, the FDA issued an emergency use authorization for distributing the drugs to doctors, who could prescribe them to hospitalized patients “when a clinical trial is not available or feasible.”

In anticipation of demand continuing to grow, the agency in mid-April published guidance for making generic versions for doses of hydroxychloroquine and chloroquine.

Hydroxychloroquine, known as safer than chloroquine, is being studied closely in the United States. Clinical trials are underway in Minnesota, Tennessee, and New York. South Dakota, led by Republican Gov. Kristi Noem, a Trump ally, is conducting a statewide trial, the first state in the nation to do so. It received 1.2 million doses from the federal government.

“I am excited patients across the state will have access to this drug, and we will learn more about its benefits in treating and even preventing COVID-19,” South Dakota Secretary of Health Kim Malsam-Rysdon said in a statement.

As of April 21, 200 people in South Dakota were being treated with the drug, according to Sanford Health.

It is one of several states that say they are using some of the doses for clinical trials going on to assess whether the drugs have benefits for COVID-19 patients.

Some states—including Tennessee, Nevada, and Kansas—have staunchly opposed using the anti-malarials before they’re proven to be effective against the new disease from China.

The Tennessee Department of Health sent a letter warning against using the drug or hoarding it.

“We were seeing a flood of inappropriate prescribing and hoarding, quite frankly,” Health Commissioner Lisa Piercey told reporters.

Utah is one of the states building up a supply of hydroxychloroquine and chloroquine. Gov. Gary Herbert said Friday that he stopped a plan to spend $8 million to buy 200,000 additional doses while promising a probe of the state’s initial $800,000 purchase of doses.

Nevada, another state that barred the use of hydroxychloroquine to treat COVID-19, is facing a lawsuit over its ban.

“It’s criminal and it’s going to carry liability, because if they have those meds in that hospital, when that person showed up with those progressed symptoms and they didn’t give them to them and they sent them home and told them to sweat it out, I think you have a big [expletive] problem on your hands,” Reno attorney Joey Gilbert, who filed the lawsuit April 21 in state court in Washoe County, told The Epoch Times.

Some medical experts have stressed the need for rigorous testing to determine whether the drugs are safe and effective. Even if they are effective for some stages of the disease, and in some doses, others say the studies will help determine when and how to administer the treatments.

“Hydroxychloroquine has showed promise in a lab setting against SARS-CoV-2, the virus that causes COVID-19 and preliminary reports suggest potential efficacy in small studies with patients,” James Kiley, director of the National Heart, Lung, and Blood Institute, said in a statement announcing one of the trials.

“However, we really need clinical trial data to determine whether hydroxychloroquine is effective and safe in treating COVID-19.”

In recent weeks, Brazilian researchers halted half of a study of chloroquine against COVID-19 because of potential safety hazards, and a study of U.S. veterans treated with hydroxychloroquine found no evidence it was effective against the disease.

But Secretary of Veterans Affairs Robert Wilkie said the drug is working in middle-aged and younger patients and doctors in a global survey labeled it as the most effective therapy in treating the CCP virus.

A New York doctor told The Epoch Times’s sister company NTD that over 400 of his high-risk patients recovered but stressed he uses hydroxychloroquine in combination with zinc and azithroymycin.

“The virus is inside the cell, the zinc cannot get inside the cell for biochemical reasons, so the hydroxychloroquine opens the door and lets the zinc in. That’s all it does, in this context,” Dr. Vladimir Zelenko said. The antibiotic azithromycin, he added, protects the patient from secondary infections.