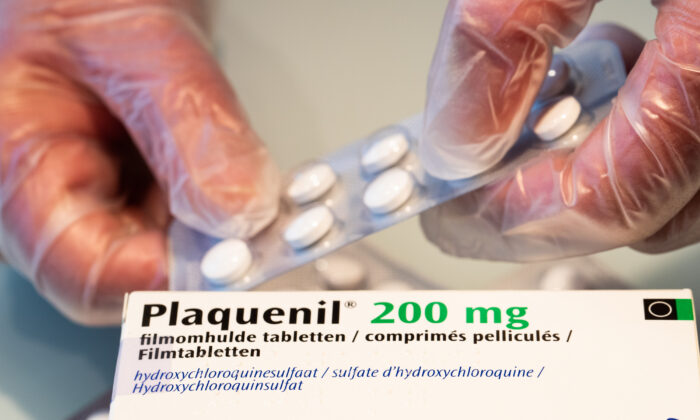 Osteopathic physicians are suing Nevada’s governor and the state’s pharmacy board over their decision to ban the use outside of hospitals of two relatively safe, well-established anti-malarial drugs to treat COVID-19, the disease caused by the CCP virus.

Reno attorney Joey Gilbert, who filed the lawsuit April 21 in state court in Washoe County, Nevada, said his clients believe that “the doctor and patient relationship is sacred and that the private practitioner is in a better position” to know how to treat a patient than an emergency room physician who is seeing the patient for the first time.

The ban is “illegal,” Gilbert told The Epoch Times in an interview. Under federal law, the pharmacy board isn’t allowed to practice medicine, and “that’s what they’re doing by taking tools off the tables for doctors.”

“There are just thousands of lives saved across the United States now between New York, Michigan, Los Angeles, Florida, and here in Nevada, because of this hydroxychloroquine, on top of the fact that I’ve had two parents that are survivors, and they used it.”

Is Nevada “the dummy state,” he asked rhetorically, adding that the other 49 states don’t restrict the use of the two drugs for COVID-19 patients.

“We’re the only one that you have to be in-patient on a chart order and then you can leave the hospital outpatient, but you have to come in and be sick enough for the doctor to say, ‘Yes you need it,’ and if you’re that state, guess what? You’re probably too [expletive] far gone.”

“It’s unconscionable. And I say it’s criminal and it’s going to carry liability, because if they have those meds in that hospital, when that person showed up with those progressed symptoms and they didn’t give them to them and they sent them home and told them to sweat it out, I think you have a big [expletive] problem on your hands,” he said.

“I’m really upset about the people that don’t have health care, don’t have a primary care doctor—they really are going to be told to wait till they’re so bad, and that’s what’s going to happen in these nursing homes, they’re going to get decimated.

“It’s going to be a bloodbath.”

Gov. Steve Sisolak, a Democrat, declared a public health emergency on March 12. With the governor’s blessing, the Nevada State Board of Pharmacy on March 23 adopted emergency regulations restricting the “prescribing and dispensing” of chloroquine phosphate and hydroxychloroquine sulfate for patients outside of a hospital setting. Hydroxychloroquine is marketed as Plaquenil.

The board raised the alarm, claiming the oral prescription drugs, which are also used to treat malaria, lupus, porphyria, and arthritis, were being hoarded, which led to a “resulting shortage of supplies of these drugs for legitimate medical purposes,” according to the legal complaint filed in the case that is cited as Nevada Osteopathic Medical Association v. Sisolak.

“There’s not an ounce, not a scintilla of evidence that there was an emergency, that there was a run on the meds, that there was a shortage, but because of this governor’s ban, it’s created the shortage,” he said. “Suppliers took meds elsewhere. It slowed things down so pharmacies couldn’t re-up before other people put in big orders.”

Critics of Nevada’s policy say the drugs are safe and effective at ordinary doses and that opposition to their use is purely political, a knee-jerk reaction against President Donald Trump’s qualified endorsement of them.

At a March 19 press briefing, referring to the antiviral drug Remdesivir and chloroquine, Trump said, “And I think it’s going to be very exciting. I think it could be a game-changer. And maybe not.”

A panel of experts convened by the U.S. National Institutes of Health (NIH) found April 21 that there wasn’t enough clinical data to recommend either for or against the use of hydroxychloroquine or chloroquine alone to treat COVID-19. While both drugs can lead to heart problems, that side effect is rare, according to Science magazine.

There are medical doctors in California, Massachusetts, and Texas who have reported using hydroxychloroquine successfully against the disease, and 37 percent of respondents in an international poll of more than 2,000 physicians agreed the drug was the “most effective therapy” against COVID-19, The New York Post reported April 2.

The Lancet reports that chloroquine, a derivative of quinine, an ingredient in tonic water made from the bark of Cinchona plants, has historically been successful in treating malaria, and has been effective against the severe acute respiratory syndrome (SARS) coronavirus, or SARS-CoV, in in-vitro studies. The CCP virus, commonly known as the novel coronavirus, is also known as SARS-CoV-2.

On March 28, Rear Adm. Denise Hinton, chief scientist at the U.S. Food and Drug Administration, authorized the use of the two drugs by health care providers to treat COVID-19, saying they met the necessary legal requirements for “safety and potential effectiveness.”

“They just know hydroxychloroquine breaches the cell barrier to help get zinc in, and zinc stops the multiplication or growth process of the virus,” he said.

The Epoch Times reached out to the offices of Sisolak and the Nevada State Board of Pharmacy for comment; neither responded immediately.