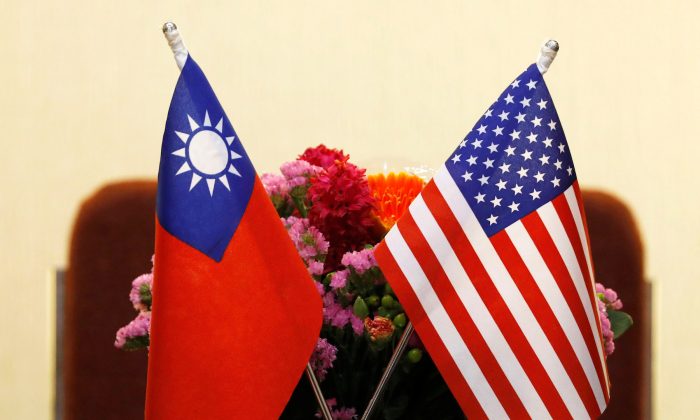 Flags of Taiwan and United States are placed for a meeting between U.S. House Foreign Affairs Committee Chairman Ed Royce speaks and with Su Chia-chyuan, president of the Legislative Yuan in Taipei, Taiwan, on March 27, 2018. (Tyrone Siu/Reuters)
International

WASHINGTON—The U.S. State Department has approved the possible sale to Taiwan of M1A2T Abrams tanks, Stinger missiles, and related equipment at an estimated value of $2.2 billion, the Pentagon said on July 8.

The United States has no formal ties with Taiwan but is bound by the Taiwan Relations Act—signed into law by then-President Jimmy Carter in April 1979—to provide it with the means to defend itself. The United States is Taiwan’s primary arms supplier.

Meanwhile, China considers the island part of its territory despite it being a de facto independent country with a democratically-elected government, and its own currency, legal system, and military. Beijing has often threatened the use of force to unite Taiwan with the mainland in the future.

As with past U.S. arms sales, China’s Foreign Ministry spokesperson Geng Shuang had denounced the U.S. government’s decision to sell the weapons to Taiwan, when the Taiwanese government confirmed it was seeking a deal in June.

“Taiwan will speed up investment on defense and continue to deepen security ties with the United States and countries with similar ideas,” Chang Tun-han, a spokesman for Taiwan’s president, said in a statement.

Taiwan President Tsai Ing-wen said in March that Washington was responding positively to Taipei’s requests for new arms sales to bolster its defenses in the face of pressure from China.

Taiwan’s Defense Ministry confirmed it had requested the weapons and that the request was proceeding normally.

The U.S. commitment to providing Taiwan with the weapons to defend itself helps Taipei’s military raise its combat abilities, consolidates the Taiwan-U.S. security partnership, and ensures Taiwan’s security, the ministry said in a June statement.

There has already been three U.S. arms sales to Taiwan since Donald Trump became president.

The first of the three sales took place in June 2017, a total of $1.42 billion in U.S. arms, which included technical support for early warning radar, anti-radiation missiles, torpedoes, and missile components, according to The Associated Press.

By Mohammad Zargham, Mike Stone, and Patricia Zengerle. The Epoch Times contributed to this report.