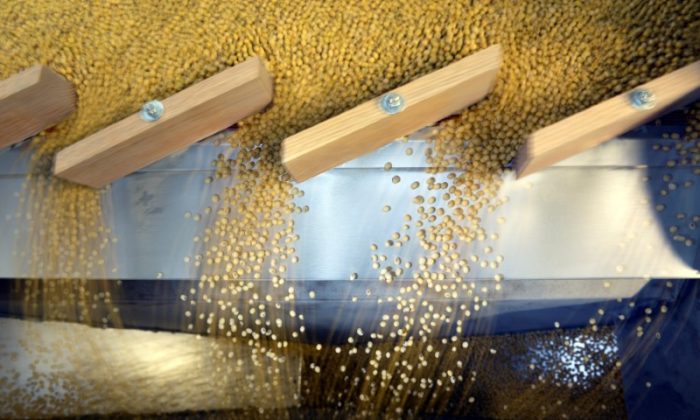 Soybeans being sorted according to their weight and density on a gravity sorter machine at Peterson Farms Seed facility in Fargo, North Dakota,on Dec. 6, 2017. (REUTERS/Dan Koeck)
US News

US Soy Acres Top Corn for the First Time Since 1983: USDA

WASHINGTON—U.S. farmers planted more soybean acres than corn for the first time in 35 years even as domestic soy supplies reached the biggest on record for early June, the U.S. Agriculture Department said on Friday.

Growers hoped for better profits for the oilseed, which costs less to plant than corn, but a brewing trade war with China has driven prices sharply lower since the planting season ended.

Analysts had pegged soybean acreage at 89.691 million and corn acreage at 88.562 million, based on the average of estimates given in a Reuters poll.

Corn and soybean futures rallied to session highs after the report was released but quickly pared gains.

“You have to ask yourself – with corn being down 47 cents for the month, and beans down $1.50 – do the bears want to push those prices even further down on this news?” said Matt Connelly, grain and energy analyst with Hightower Report. “I don’t think so.”

Corn and soy acreage both rose from the USDA’s planting intentions report, issued at the end of March. Corn acreage came in 1.102 million higher than the March forecast, its biggest positive change between the two reports since 2012.

On the stocks front, domestic soybean supplies stood at 1.222 billion bushels as of June 1, topping the record of 1.092 billion set in 2007.

Soybean usage was the highest ever for the quarter at 888 million bushels, but stocks remained high due to last year’s bumper harvest.

The USDA’s quarterly stocks report also showed the domestic corn stockpile at 5.306 billion bushels, the largest June figure since 5.839 billion bushels in 1988 and the third highest ever.

Wheat stocks as of June 1 stood at 1.100 billion bushels, in line with estimates.