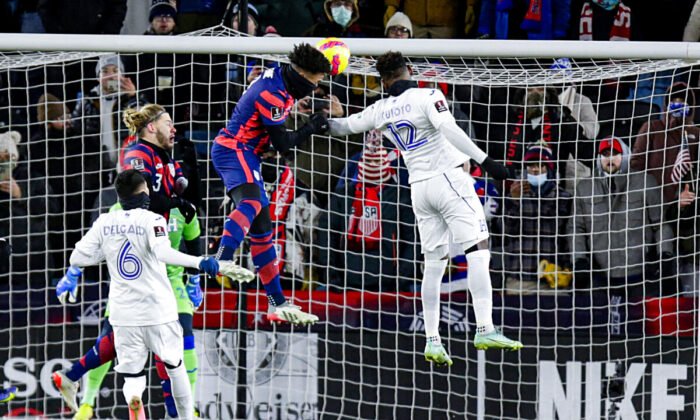 In the coldest game in U.S. men’s national team (USMNT) history in front of sold crowd of more than 19,000 in St. Paul, Minnesota, Wednesday night, the U.S. team grabbed second in CONCACAF World Cup qualifying with a completely dominant victory over Honduras 3–0.

Various reports stated that the temperature during the game was 1–3 degrees F with a wind chill of minus 14; in violation of United States Soccer Federation (USSF) safety guidelines.

The USSF did arrange for heated benches and numerous other warming devices and equipment from the Minnesota Vikings.

However, U.S. goalkeeper Matt Turner was forced to remove the NFL hand-warmer belted around his waist early in the match by referee Oshane Nation. Turner would resort to doing sprints in his box to stay warm as there were only two shots by Honduras, none on goal.

Before the match, Honduran coach Hernan Gomez said the game was not going to be enjoyable, but would be endured. The Honduran Soccer Federation stated that two of their players were substituted at halftime due to “extreme climate conditions.”

Following the match, Gomez stated that he would not analyze the game or the performance of his team. “Inside the locker room my players are receiving IV fluids and many of them are in pain,” said Gomez.

U.S. coach Gregg Berhalter had no regrets of scheduling the game in the extreme weather conditions.

“When we go down to those countries, and it’s 90 degrees and 90% dew point and it’s unbearable humidity, and guys are getting dehydrated and cramping up and getting heat exhaustion, you know, that’s the nature of our competition.”

The United States (6–3–2) had defeated Honduras (0–3–8) on Sept. 10, 2021, in the first octagonal “round-robin” meeting 4–1. Some soccer critics state that Berhalter and the USSF took it too far and that they should have played the game in better conditions.

In the past, there were CONCACAF games on American soil where the opponents had as many, or more, supporters than the home team.

The Americans completely controlled the game against Honduras from the start, with approximately 73 percent of the ball-possession, and 16 shots to two.

“Right from the opening whistle,” said coach Gregg Berhalter, “I knew that we were in good control.”

Previously in these qualifiers, the United States had difficulty scoring in the first half; and were unable to take advantage of set pieces.

However, all three goals came from free-kicks. Honduran goalkeepers Luis López and Edrick Menjivar, who took over at halftime, combined for five saves and defensive plays to keep it the scoreline from getting potentially much higher.

The first goal came early in the eighth minute from a free kick on the right side by Kellyn Acosta, nearly 40 yards from goal, to find Weston McKennie at the top of his jump from eight yards away in front of the right post for a beautiful header in the upper right-corner past a late-diving Lopez.

McKennie has become the best, most consistent, performer for the United States so far through the qualifiers. His club team, Juventus, is also very happy with his play.

The second goal came from another free-kick in the 37th minute, this time from the left—a right-footed in-swinging drive approximately 38 yards away by Kellyn Acosta into the box about nine yards from goal, resulting in Zimmerman’s ninth international goal.

It got by Jordan Morris, who was attempting to flick a header, and struck one of two Honduran defenders as it bounced through to Zimmerman. His mark fell as Zimmerman turned back to his left for a first-time volley into the lower right side of the goal, beating Lopez.

The 67th minute gave way to Christian Pulisic’s 18th international goal after just being substituted into the game.

Acosta took the corner kick from the right placing it on top of Ricardo Pepi, who flicked a header to the backside hitting Zimmerman’s knee; the ball dropped to Pulisic, who quickly struck a half-volley into the bottom-left side of the goal, beating Menjivar.

“It was freezing out here. I’m looking forward to getting into the locker room,” said Pulisic.

Nonetheless, the United States sits second—four points behind Canada, after losing 2–0 recently to its northern neighbor—and edges out Mexico by a “goal-differential” of +9, to Mexico’s +6.

Three matches remain for the United States in CONCACAF play: March 24 in Mexico City, March 27 in Panama, and March 30 in Costa Rica.

One win and a draw should be enough to ensure the United States finishes in the top three of CONCACAF to qualify for the World Cup; Fourth place leaves an opportunity to qualify with one playoff game from another division.