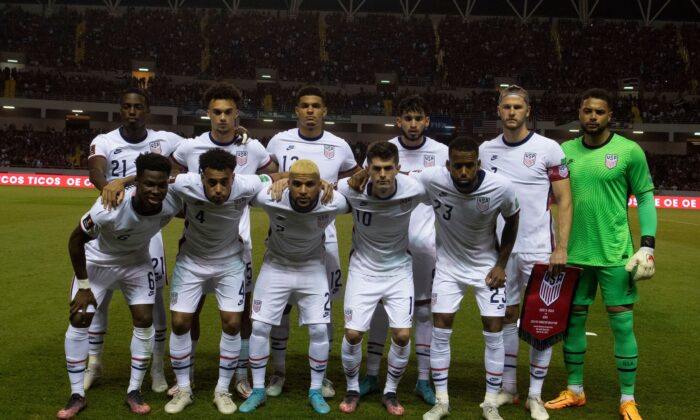 US Soccer Back in the World Cup in December

The United States Men’s Soccer Team (USMNT), qualified to the compete in the 2022 World Cup with a 2–0 loss to Costa Rica at Estadio Nacional in San Jose, Costa Rica, on March 30.

With the top three teams receiving automatic berths to the World Cup through Confederation of North, Central America and Caribbean Association Football (CONCACAF) qualifiers, the U.S. side could lose by up to five goals in their final match and still advance.

The loss placed the Americans third in CONCACAF standings after sitting in second for the past several months, with Mexico leaping into second behind Canada.

The Americans await their 11th World Cup appearance draw on Friday for placement into the first round of group round-robin play kicking off Nov. 21.

The 32-team field in the World Cup typically plays from June through July, but is pushed back this year to winter to avoid the extreme summer heat of hosting nation Qatar.

Mexico defeated El Salvador 2–0, to tie Canada in points atop the group, as the Canadians fell to Panama 1–0 but still edged Mexico to finish first in the standings through a goal differential of +16 over +9.

American coach, Gregg Berhalter stated following the game: “Reflecting on these last seven months, this team has grown together. Being the youngest team in the world to qualify for the World Cup is no easy task. But what we saw was the resilience of the team, the strong mentality of the team and absolute focus to reach our goals.”

Great uncertainty has followed the USMNT program ever since failing to qualify for the 2018 World Cup. After the last qualifier loss at Trinidad and Tobago, Berhalter was eventually hired to re-inspire the team taking command on Dec. 2, 2018.

Berhalter played on the 2002 USMNT that reached the quarterfinals at the World Cup, and was also on the 2006 squad that was eliminated in first-round group play.

Since its elimination in 2018, the United States has fielded 114 new players, 88 of those with Berhalter. During the 14 CONCACAF qualifiers, 38 players saw action, and six others were on the roster without getting playing time.

The team shall play friendly matches in June and September, giving Berhalter more opportunities to evaluate the total pool of several dozen players before finalizing the roster of 23 players to compete in the World Cup.

The United States, Canada, and Mexico shall host the following World Cup in 2026. The competition will expand to 48 countries, but the hosts typically receive automatic berths.