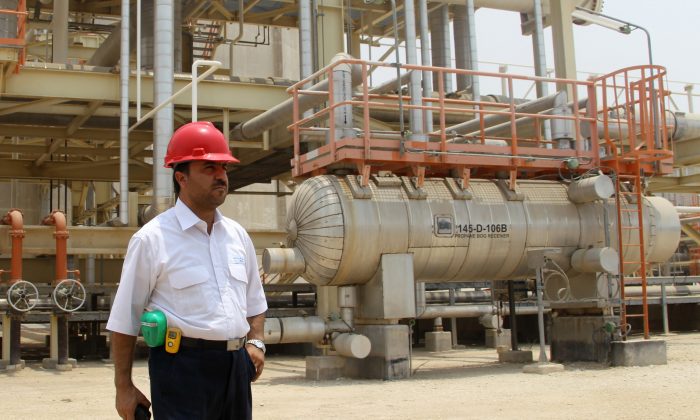 A worker at the South Pars gas field in the port town of Asaluyeh, Iran. (Atta Kenare/AFP/Getty Images)
US-China Relations

“We’ve said that we will sanction any sanctionable behavior, and we mean it,” Pompeo said in a speech in Florida in which he announced the move.

It comes amid increased tensions between Iran and the West as well as between the United States and China, which have been engaged in a major trade war.

U.S. President Donald Trump’s administration has stepped up its sanctions against Iran after breaking from a nuclear pact brokered between Tehran and other Western nations under the previous administration of President Barack Obama.

In a later statement, Pompeo said Zhuhai Zhenrong “knowingly engaged in a significant transaction for the purchase or acquisition of crude oil from Iran” after the expiration of a U.S. sanctions waiver covering China on May 2.

He said the sanctions blocked all property and interests in property of Zhuhai Zhenrong in the United States and barred its chief executive, Youmin Li, from entry into the country.

“Any entity considering evading our sanctions should take notice of this action today,” Pompeo said. “It underscores our commitment to enforcement and to holding the Iranian regime accountable.”

“China firmly opposes the U.S. imposition of unilateral sanctions and so-called ‘long-arm jurisdiction’ on China and other countries invoking its domestic law,” a spokesperson said by email.

Zhuhai Zhenrong, which specializes mainly in buying Iranian oil and is based in Beijing, was previously sanctioned in 2012 by the Obama administration over its dealings with Iran.

The company became a subsidiary of Macau-based, state-controlled conglomerate Nam Kwong Group in a merger mandated by Beijing in late 2015.

In a brief statement on its website on Tuesday, Nam Kwong said Zhuhai Zhenrong had been “officially spun off” since Sept. 30, 2018. Nam Kwong had “no equity ties, or any business or legal relations” with the oil trader, it said.

Analysts at ClearView Energy Partners said Zhuhai Zhenrong is largely disconnected from the Chinese financial system, which would limit the “contagion” of the sanctions to other entities and banking systems. But they said Washington’s move was another shot across the bow to demonstrate the Trump administration’s stance on Iran.

“We see the shot as being aimed not just at China, but also at other potential buyers,” such as Turkey and possibly Russia, which could serve as a middleman for brokering oil from Iran to other countries, ClearView said.

The United States reimposed sanctions on Iran in November after pulling out of the 2015 nuclear accord between Tehran and six world powers.

Last month, the U.S. special representative for Iran, Brian Hook, said Washington would sanction any country that continued to import Iranian oil and warned that it would look at reports of Iranian crude going to China.

According to data from government and trade sources, Asia’s crude oil imports from Iran fell in May to the lowest in at least five years after China and India wound down purchases amid U.S. sanctions, while Japan and South Korea halted imports.