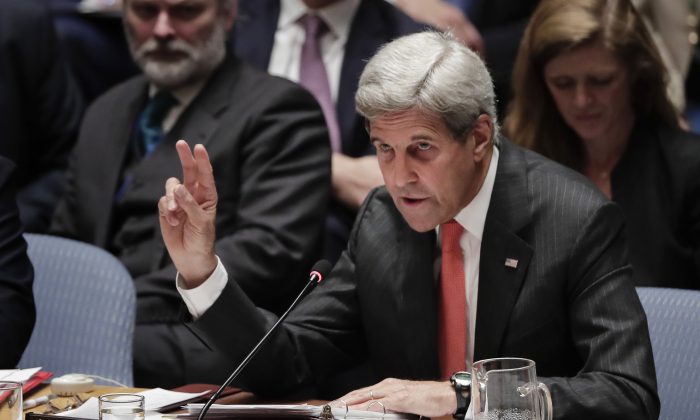 NEW YORK—The United States and Russia are taking their differences over the conflict in Syria to new heights, after trading ferocious allegations of duplicity and malfeasance at the United Nations Security Council.

After a fractious meeting of the council on Wednesday, Secretary of State John Kerry and Russian Foreign Minister Sergey Lavrov were set to duel again over Syria at a gathering of the roughly 20 nations that have an interest in Syria. Thursday’s meeting of the International Syria Support Group comes after the two men blamed each other for spoiling the country’s cease-fire that they had agreed to earlier this month. Each has blamed the other for violations.

Kerry called for all warplanes to halt flights over aid routes, while Lavrov suggested a possible three-day pause in fighting to get the truce back on track.

Thursday’s meeting comes a day after Kerry and Lavrov abandoned diplomatic niceties in a fractious public debate over Syria, blaming each other for the failure of a week-old truce and offering only temporary patches to stem the bloodshed.

In a U.N. Security Council session originally envisioned to enshrine the Sept. 9 truce, world powers rued the possibility of a darker phase in the conflict amid increased attacks on humanitarian workers. The council’s nations all sought to revive the U.S.-Russian cease-fire deal, but once again illustrated why they’ve been unable for more than five years to stop Syria’s civil war.

“Supposedly we all want the same goal. I’ve heard that again and again,” a visibly angry Kerry told the council. “Everybody sits there and says we want a united Syria, secular, respecting the rights of all people, in which the people of Syria can choose their leadership. But we are proving woefully inadequate in our ability to be able to get to the table and have that conversation and make it happen.”

While the U.S. and Russia have previously butted heads over several proposed resolutions critical of the Syrian government, Wednesday’s agenda didn’t even include a suggested course of action. Instead, the two-hour discussion served as a warm-up act for a Thursday meeting blocks away in New York that will include Kerry, Lavrov and their counterparts from more than a dozen European and Arab countries.

Kerry blamed Russia, lambasting what he portrayed as a cynical response to an airstrike on a humanitarian aid convoy this week that killed 20 civilians and raised “profound doubt” about Russia’s and Syria’s willingness to abide by the cease-fire. The U.S. believes that a Russian-piloted aircraft carried out the strike, said a senior American official, who wasn’t authorized to speak publicly on the matter and demanded anonymity.

Russia has denied U.S. claims that it was responsible, but Kerry focused on its shifting explanation of what might have happened.

First, Kerry said, Russian President Vladimir Putin’s press secretary described the attack as a “necessary response” to an alleged offensive by al-Qaida-linked militants elsewhere in the country. Then, a Russian ambassador said forces were targeting another area.

Russia’s Defense Ministry followed by saying the aid convoy was accompanied by militants in a pickup truck with a mortar, Kerry said, adding that no such evidence exists. Then, the ministry denied any Russian or Syrian involvement as its spokesman suggested, in Kerry’s words, that “the food and the medicine just spontaneously combusted.”

“This is not a joke,” Kerry exclaimed, urging all to stop the “word games that duck responsibility or avoid the choices … with respect to war and peace, life and death.” His pleas crossed paths with another statement by Russia’s government, this time suggesting a U.S. coalition Predator drone was operating nearby when the convoy attack occurred. The Pentagon said no drone was in the area at the time.

It was one of Kerry’s most bitter exchanges with Moscow as secretary of state, laced with invective and outrage.

But he also offered one concrete suggestion to revive diplomatic hopes: to ground all aircraft in key areas, focused on protecting aid routes in northern Syria. It was unclear if Russia and Syria would agree.

Kerry’s words came immediately after Lavrov’s own barbs, underscoring a breakdown in trust since the pair sealed the cease-fire agreement and potential U.S.-Russian military partnership against the Islamic State and al-Qaida 12 days ago. Much of the international community hailed that outcome, only to watch it unravel amid an upsurge in violence that included an accidental U.S. strike that killed more than 60 Syrian soldiers.

Lavrov, whose country has helped the Syrian government shore up its position, said the U.S. bore the biggest responsibility for peace by separating opposition forces from terrorists. He called for the U.N. to expand its terrorism list to include groups at the fringes of a U.S.-backed rebel umbrella group and called Washington’s errant strike an “outrageous violation.”

The Russian also cited a series of truce violations by U.S.-backed rebel groups near the northern city of Aleppo. And in a not-so-subtle jab at Washington, he called Syria’s conflict, as well as those in Iraq and Libya, the “direct consequence” of foreign military interventions and “political engineering.”

Larvov and Kerry’s speeches laid bare their widely divergent views of a war that has killed up to a half-million people, contributed to Europe’s worst refugee crisis since World War II and allowed the Islamic State to emerge as a global terror threat.

Lavrov on Wednesday mentioned the possibility of a three-day period of “silence.”