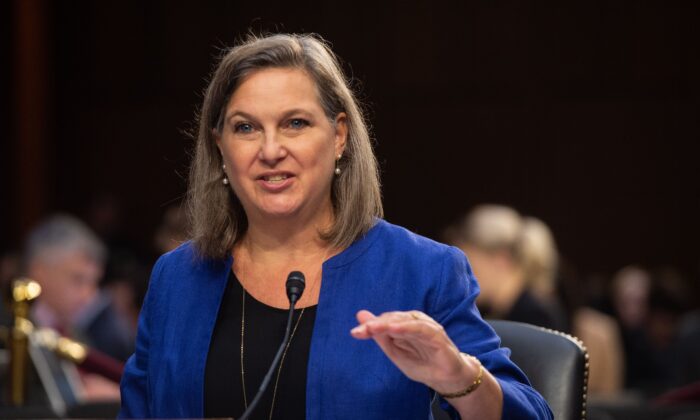 Former US Assistant Secretary of State for European and Eurasian Affairs Victoria Nuland testifies before the Senate Intelligence Committee during a hearing on "Policy Response to Russian Interference in the 2016 US Elections" on Capitol Hill in Washington on June 20, 2018. (Nicholas Kamm/AFP via Getty Images)
International

MOSCOW—Russia will allow U.S. Under Secretary of State Victoria Nuland to visit for talks despite having previously blacklisted her, after Washington agreed to lift a similar restriction placed on a Russian citizen, Moscow said on Sunday.

The U.S. official, who is expected in Moscow from Oct. 11 to 13, visits at a time when political ties between the countries are badly strained. She will meet senior officials to discuss bilateral, regional and global issues, the State Department has said.

“She was actually on our sanctions lists that mean that a person cannot cross the border,” Maria Zakharova, Russia’s Foreign Ministry spokeswoman, was quoted as saying by RIA news agency.

“They (the U.S.) included Russian representatives and foreign policy experts on their sanctions lists. So in this case, the question was resolved on a parity basis. Yes, she will be in Russia,” she was quoted as saying.

Zakhrova later clarified to the Govorit Moskva radio station that one Russian citizen had been removed from the U.S. sanctions list. She did not disclose the person’s name.

The United States has imposed an array of sanctions on Russia. Relations between Moscow and Washington sank to post-Cold War lows in 2014 after Russia’s annexation of Crimea from Ukraine, and they remain strained over a range of other issues.