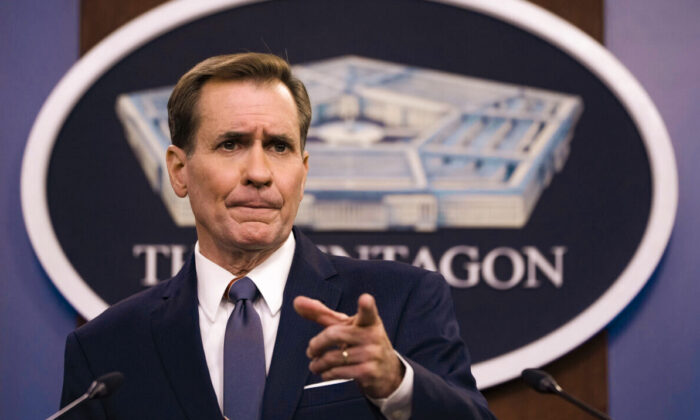 US Reviewing Sanctions Against Russia ‘The Likes of Which We Have Not Looked at Before’: Pentagon

The United States will impose on Russia sanctions and economic consequences “the likes of which we have not looked at before,” if President Vladimir Putin invades Ukraine, the U.S. Department of Defense’s top spokesman said on Sunday.

“I think we’ve been very clear with Mr. Putin about the economic consequences that could come his way and the way the Russian people should he further incur… invade inside Ukraine,” Pentagon spokesperson John Kirby told Fox News Sunday.

“I think we’ve been very, very clear that we’re going to look at sanctions and economic consequences, the likes of which we have not looked at before even considering even as far back as 2014,” he added.

Kirby also stressed that Russia could invade Ukraine “at any time” and claimed there are a number of ways to do so at Putin’s disposal, either by way of large-scale or small-scale actions.

“Putin has a lot of options available to him if he wants to further invade Ukraine, and he can execute some of those options imminently,” Kirby said.

However, the Pentagon spokesperson also emphasized that the current situation “doesn’t have to come to conflict.”

“We still believe there’s room and space for diplomacy and we’d like to see that be the solution here,” he said.

Russia in December demanded that NATO deny Ukraine and other former Soviet nations membership to the alliance and that NATO members scale back troop deployments in Central and Eastern Europe.

Washington officials have rejected those demands and instead put forth a number of proposals while maintaining that they are open to dialogue with Moscow regarding issues such as arms control, confidence-building measures, and limits on military exercises.

While the Kremlin has also said it is open to dialogue with the United States, during a call on Friday with French President Emmanuel Macron, Putin claimed that the proposals put forth by Washington failed to address his country’s concerns regarding Ukraine, a former Soviet republic.

“The U.S. and NATO responses didn’t take into account Russia’s key concerns such as preventing NATO expansion, non-deployment of strike weapons systems near Russian borders, or returning the alliance’s military potential and infrastructure in Europe to positions existing in 1997,” Putin was reported to have said, according to a Kremlin readout of the call.

Kremlin officials have repeatedly denied that Russia wants to go to war with Ukraine.

But amid ongoing tensions between the two countries, U.S. officials have considered levying sanctions against top Russian officials and the country’s energy sector, including pulling the plug on the completion of the Nord Stream 2 pipeline connecting Russia to Germany.

Officials are yet to impose such sanctions on the gas pipeline, despite fears from Ukrainian officials that it could be used by Russia as a weapon against it.

Kirby on Sunday stressed that the administration won’t yet impose sanctions because “one of the things about sanctions is once you trip that, then the deterrent effect is lost.”

Meanwhile, Ukraine’s President Volodymyr Zelensky has warned the United States that waiting to impose such sanctions on Russia until after an invasion will prove futile.

“Putin does not understand these kind of vague threats. ‘If’ is not in his vocabulary. There’s ‘yes’ and there’s ‘no’,” he told U.S. senators visiting Kyiv earlier this month.

On Sunday, several top Republican and Democrat senators indicated they are close to reaching a bipartisan deal on legislation that would sanction Russia if it were to invade Ukraine.

“I would describe it as that we are on the one-yard line,” Sen. Bob Menendez (D-N.J.), the head of the Senate Foreign Relations Committee, said on CNN’s “State of the Union.”