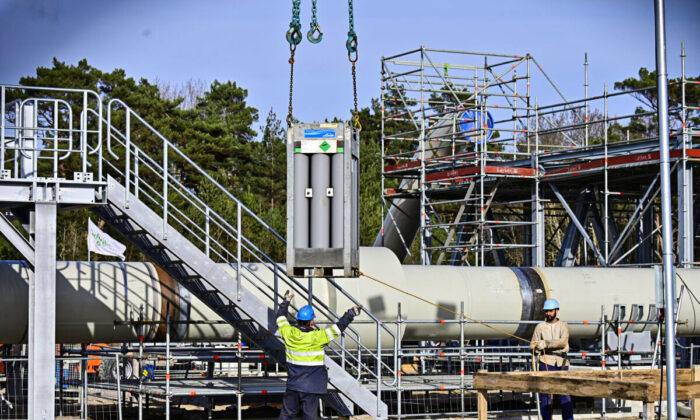 Construction of Nord Stream 2 began in 2018, and by 2019, it was complete in Russian, Finnish, and Swedish waters, with the majority of the work also complete in German and Danish waters.

The pipeline stretches about 760 miles through the Baltic Sea from Russia to Germany and would double Nord Stream’s capacity to ship Russian natural gas directly to the European country.

However, Germany’s energy market regulator announced in November that it had temporarily suspended the certification process for the pipeline after ruling that its operator within Germany doesn’t comply with conditions set by German law.

Nordstream has also been opposed by Ukrainian officials over fears it could be used by Russia as a weapon against it.

While gas is not currently flowing through the pipeline and it is not operational, Price told NPR that Nord Stream serves as “leverage” for both the United States and Germany as well as the trans-Atlantic community.

Price’s comments come amid growing concern among Western nations after Putin has reportedly amassed more than 100,000 soldiers near the Ukrainian border, sparking concerns of a possible invasion.

Russia has repeatedly denied the accusation.

In December 2021, Russia demanded NATO deny Ukraine and other former Soviet nations membership of the alliance, and also demanded NATO members scale back troop deployments in Central and Eastern Europe.

Washington and NATO allies have rejected Russia’s demands but have put forth a number of proposals and have repeatedly said they are open to dialogue with Moscow.

Defense Secretary Lloyd Austin has also placed 8,500 troops on “heightened alert” to assist with the defense of NATO allies but noted that “no decision has been made to deploy” any troops at this time.

When asked whether the United States “actually has enough leverage” and whether its actions are likely to deter Russia during Wednesday’s interview with NPR, Price pointed to Putin as the only person who can decide whether “this is the path of dialogue and diplomacy that we pursue or it’s the path of defense and deterrence.”

“We have done everything we can to signal in meaningful and sincere ways that dialogue and diplomacy is what we prefer just as we continue down that path of defense and deterrence,” Price said.

“We have provided in the last year more than $650 million in defensive security assistance. That’s almost 300 tons in defensive security assistance to the Ukrainians. More deliveries are on their way as we speak,” he added, “and we have talked extensively about the swift, the severe, the united response that the United States and our allies would enact were Russia to go forward with their aggressions.”

Meanwhile, Emily Haber, Germany’s ambassador to the United States on Wednesday said on Twitter that, “The US and Germany jointly declared last summer: if Russia uses energy as a weapon or if there is another violation of Ukraine’s sovereignty, Russia will have to pay a high price.”

She added that German Chancellor Olaf Scholz and Foreign Minister Annalena Baerbock “stated clearly: nothing will be off the table, including Nord Stream 2.”