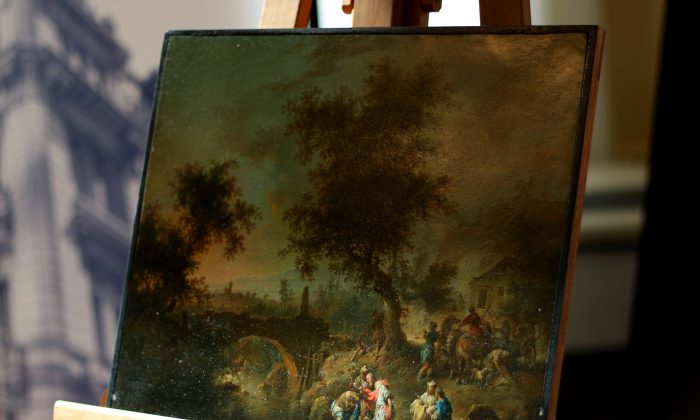 "St. Philip Baptizing a Servant of Queen Kandaki" by German painter Johann Conrad Seekatz is returned to the Polish government by the United States in a repatriation ceremony in New York on Feb. 6, 2014. (Allen Xie)
New York

It has been almost 70 years since Poland was occupied during World War II but many pieces of its art are still missing and displaced around the world today.

Polish officials accepted a painting at the Polish consulate in New York that had been stolen from the National Museum of the City of Warsaw in 1944 on Thursday.

“National heritage is a crucial element of every national identity and as such, stolen pieces of history should be returned to their rightful place,” said Ewa Junczyk-Ziomecka, Consul General of the Republic of Poland at the repatriation ceremony.

The painting “St. Philip Baptizing a Servant of Queen Kandaki” by German painter Johann Conrad Seekatz, was looted during the Second World War.

Doyle New York, an auction and appraisal company, sold it to Rafael Valls Ltd. gallery in London in October 2006.

The Poland government recognized the piece as one of its lost articles and worked with the US Immigration and Customs Enforcement (ICE) to recover it.

In 2012 it was verified as a stolen piece of Polish art and Rafael Valls, the current owner, agreed to forfeit it.

Poland was occupied by both the Germans and the Russians during the War. Six million Polish citizens were killed, three million of them were Jews, and whole cities were destroyed. The lesser known casualty of the war, however, was Polish culture.

“So many hundred and thousands of artifacts representing and constituting national identity had been looted,” bemoaned Junczyk-Ziomecka.

The Minister of Culture and National Heritage put that number at about 70,000, saying many of them are still scattered around the world today.

“The Monuments Men,” a film directed by George Clooney, is based on the true story of a US mission to recover stolen art during World War II. The film debuted in Berlin Thursday and hit theaters in the U.S. Friday.

When asked if the repatriation ceremony was scheduled to coincide with the release of the film, officials at the ceremony said it was just a coincidence.

James T. Hayes, Homeland Security Investigation special agent said he had learned about the film just a half hour before the event. However, he mentioned it in his speech, saying “It seems in the United States tales of war and courage and heroism are best told not by governments or historians, but by Hollywood.”

He said he hoped the film would bring awareness to the issue of stolen WWII art and that if there were any question as to the provenance of an item, the owner would contact Homeland Security of Investigations to have it investigated.