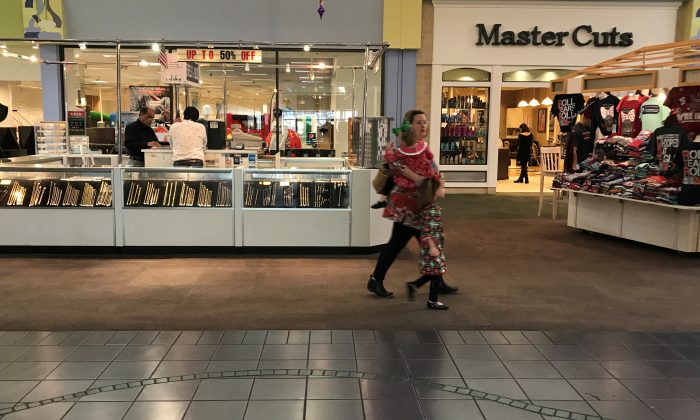 The Gadsden Mall in Gadsden, Ala., on Dec. 10, 2017. REUTERS/Carlo Allegri
Economies

WASHINGTON—U.S. retail sales barely rose in September as a rebound in motor vehicle purchases was offset by the biggest drop in spending at restaurants and bars in nearly two years.

But other details of the report from the Commerce Department on Oct. 15 were upbeat and suggested that consumer spending ended the third quarter with strong momentum, which should provide a boost to economic growth despite anticipated drags from weak exports and a struggling housing market.

Retail sales in September rose 4.7 percent from a year ago.

Consumer spending, which accounts for more than two-thirds of U.S. economic activity, is being driven by a robust labor market, with the unemployment rate near a 49-year low of 3.7 percent. Tight labor market conditions are gradually pushing up wage growth.

Consumption has also been supported by the Trump administration’s $1.5 trillion tax cut as well as higher savings. However, economists said the stimulus from the tax cuts was fading and many expected consumer spending to slow sharply in the fourth quarter.

Some also worried a recent stock market sell-off had dented household wealth, which could hurt spending.

“We believe lower tax withholdings provided meaningful lift to consumer spending growth so far this year, but that the incremental support to growth from taxes should be fading,” said Michael Feroli, an economist at JPMorgan in New York.

“We look for a more meaningful deceleration (in consumer spending) in the fourth quarter.”

Economists are estimating that consumer spending grew at an annualized rate of about 3.5 percent in the third quarter, which would be slightly below the 3.8 percent pace logged in the April-June period. Solid consumer spending should help to offset the impact on the economy from a widening trade deficit and persistent weakness in the housing market.

Growth estimates for the third quarter are above a 3.0 percent rate. The economy grew at a 4.2 percent pace in the second quarter. Growth prospects for the July-September quarter were bolstered by a second report from the Commerce Department on Oct. 15 showing business inventories rose 0.5 percent in August after increasing 0.7 percent in July.

Inventory investment is expected to contribute to GDP growth after a liquidation of stocks sliced 1.17 percentage points from output in the April-June quarter.

There were also strong increases in receipts at furniture, hobby, musical instrument, and bookstores as well as electronics and appliances outlets. But Americans cut back on spending at restaurants and bars, with sales dropping 1.8 percent. That was the biggest decline since December 2016 and followed a 0.3 percent rise in August.

While the Commerce Department said it was impossible to determine the impact of Hurricane Florence on the data, disruptions caused by the storm could have hurt sales at restaurants and bars last month.

“Retail sales for food services and drinking places may have been impacted by the hurricane in September, as consumer confidence remained solid during the month,” said Ellen Zentner, chief U.S. economist at Morgan Stanley in New York.