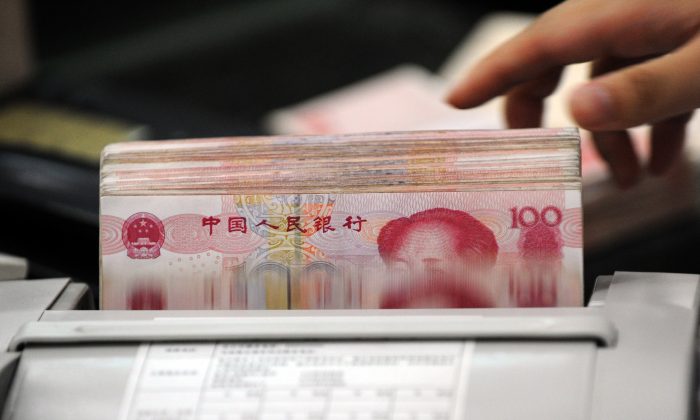 A Chinese bank clerk uses a machine to count the stacks of 100 yuan notes for a customer at a bank in Hefei, Anhui Province, China on Oct. 14, 2010. (STR/AFP/Getty Images).
US-China Relations

US Removes Designation of China as Currency Manipulator

The U.S. Treasury Department on Jan. 13 said China should no longer be designated a currency manipulator in a long-delayed semi-annual currency report, reversing its August finding, which had roiled financial markets.

The widely expected decision came as a high-level Chinese delegation arrived in Washington ahead of the Jan. 15 signing of a “phase one” trade agreement aimed at easing tensions between the world’s two largest economies after more than 18 months of tit-for-tat tariffs.

The Treasury Department designation in August was the first time since 1994 that the United States had determined China was manipulating its currency, accusing Beijing of creating an unfair competitive trade advantage.

In its latest report, the Treasury said China had made “enforceable commitments to refrain from competitive devaluation” and agreed to publish relevant data on exchange rates and external balances as part of the phase one trade deal.

The report said the Chinese yuan, after depreciating as far as 7.18 RMB (renminbi) per U.S. dollar in early September, had appreciated in October and was currently trading at about 6.93 RMB per dollar.

“In this context, Treasury has determined that China should no longer be designated as a currency manipulator at this time,” the report said.

It said, however, China should take decisive steps to avoid a persistently weak currency and allow greater market openness to strengthen its long-term growth prospects.

It raised particular concerns about Germany, the world’s fourth-largest economy, which has the world’s largest current account surplus and is currently slipping into recession. It said the German government has a responsibility to undertake tax cuts and boost domestic investment.

The Treasury report said the continued strength of the U.S. dollar is “concerning,” given the International Monetary Fund’s judgment that the dollar is overvalued on a real effective basis.

It said the real dollar remains about 8 percent above its 20-year average, noting that sustained dollar strength would likely exacerbate persistent trade and current account imbalances.