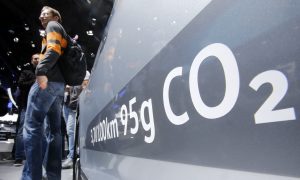 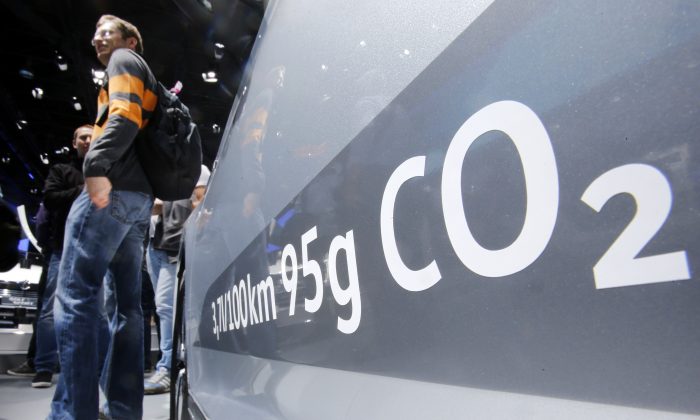 The amount of carbon dioxide emission is written on a Volkswagen Passat Diesel at the Frankfurt Car Show in Frankfurt, Germany, Tuesday, Sept. 22, 2015. (AP Photo/Michael Probst)
US

US Regulator Missed Its Best Chance to Catch VW Cheating

CHICAGO—More than a decade ago, the U.S. Environmental Protection Agency helped develop a technology that ultimately was used by an independent laboratory to catch Volkswagen’s elaborate cheating on car emissions tests. But EPA used the technology primarily to test trucks rather than passenger cars because such heavy equipment was a much bigger polluter.

That decision meant that the U.S. regulator missed its best chance to foil the German carmaker’s deception early on. The portable emissions measurement systems that EPA pioneered might have subjected VW diesel cars to on-road tests and discovered they were spewing up to 40 times the allowable levels of key pollutant nitrogen oxide under normal driving conditions.

Without that test, VW was virtually home free and evaded detection for seven years.

“If EPA had used the technology back then (on diesel cars), we could have caught it,” said Margo Oge, who was director of the EPA’s office of Transportation and Air Quality at the time and headed the office for 18 years until 2012. But she doesn’t regret EPA’s decision to focus that technology on manufacturers of trucks and heavy equipment, which had a record of cheating on tests and accounted for a much bigger portion of U.S. pollution than the nascent diesel car business.

Interviews with former and current EPA officials and other auto and environmental experts suggest that although the U.S. has the world’s toughest auto emissions standards, federal and state regulators don’t have the resources to conduct the kind of comprehensive tests that might have nabbed VW, and they rely on automakers to self-report data in a kind of honor system.

The crucial step in the U.S. testing system is “certification” of each new model or family of models, allowing them to be sold in the U.S. To get that EPA stamp of approval, car manufacturers run their own tests and submit sometimes thousands of data points to the EPA.

The EPA requires carmakers to follow a test script that has not changed in more than a decade. The script must be the same, experts said, in order to compare vehicles or validate data. They put the vehicles on a dynamometer — a treadmill for cars — that accelerates and slows down at a programmed interval known as a “drive cycle.” A device measures pollutants from the tailpipe.

Aware of the script, VW installed 2009-2015 diesel models with software that sensed when the vehicles were on the treadmill and switched the emissions system to trap the right amount of nitrogen oxide. That sophisticated software algorithm sensed things such as the position of the steering wheel, speed, the duration of the engine’s operation and barometric pressure.

Out on the road, the exhaust system would switch back to allowing more pollutants to pass through the nitrogen oxide trap and spill out of the tail pipe.

Volkswagen’s 2009 Jetta and Jetta Sportwagen models passed the dynamometer tests and were certified for sale in the U.S.

In addition to certification, the EPA runs spot checks on cars representing 15-20 percent of models in a year to verify the data from manufacturers.

“We can’t do a 100 percent check of every data point for every model,” said Byron Bunker, director of the EPA’s vehicle compliance program. “We focus on new vehicles, new technologies or those where we have a concern.”

After that, emissions tests are not required at U.S. ports of entry for imported cars or at dealerships. And most states do not require owners of diesel cars to submit them to an emissions test to get a car registration renewed.

The 21 states that do test diesel vehicles usually are not equipped to catch cheaters. Most only examine data stored in on-board-diagnostics systems for a record of faults that would indicate a broken component or a maintenance problem. But in the case of the Volkswagens, if the cars were operating as designed, no fault would appear.

It was only when researchers connected with West Virginia University last year used the technology pioneered by EPA, that VW’s duplicity was finally exposed by subjecting the cars to actual road tests. Threatened with having its new models banned from the U.S. market, VW admitted the cheating.

In response, EPA last month announced it would toughen testing and is keeping the details secret from carmakers. The new methods could include the use of the portable devices and other tests that replicate real-world driving or just changing the treadmill script. The EPA will have to prioritize its limited money for testing, Christopher Grundler, the agency’s current Transportation and Air Quality director, said last week. The regulator’s budget has been slashed 21 percent by Congress since fiscal 2010, according to data on its website.