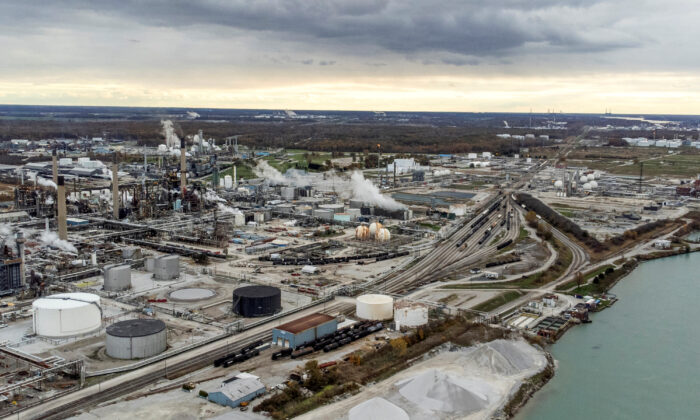 The Imperal Oil refinery, one of many facilities in Canada's "Chemical Valley" in Sarnia, Ontario, Canada, on Nov. 3, 2021. (Nick Iwanyshyn/Reuters)
Markets

NEW YORK—U.S. refiners are expected to buy more Canadian oil after the Biden administration ends releases from the Strategic Petroleum Reserve (SPR) this fall, traders said, adding this should boost the price of Canadian barrels at a time of tight global supply.

The coming end of SPR releases could shift market dynamics again in a year of high volatility following Russia’s invasion of Ukraine in February. In March the White House announced it would release 180 million barrels from the U.S. strategic reserve to help quell high prices.

The releases have weighed on the price of Western Canada Select (WCS), the benchmark Canadian heavy grade. That oil, because it has similar qualities to the sour crude that dominates U.S. reserves, has traded at around $20 a barrel below U.S. West Texas Intermediate (WTI) crude for much of the summer. In 2021 the average WCS discount was $12.78 a barrel, according to the Alberta Energy Regulator.

Canadian crude exports from the U.S. Gulf have dropped in the last two months, falling to around 130,000 barrels per day (bpd) in July and August, below last year’s pace of 200,000 bpd, said Matt Smith, lead oil analyst for the Americas at Kpler. Foreign buyers have turned to discounted Russian barrels, tempering Canadian crude exports.

“It’s a bit of a game of musical chairs,” Smith said. “When the SPR releases finish, these refiners will look to lean harder again on Canadian barrels or seaborne imports.”

Some market participants worry that limited pipeline capacity from Canada to the United States could cause bottlenecks. This could cause a glut in the Alberta hub, which could in turn drive down prices there.

Canada hit record production of 5.5 million barrels a day of oil in 2021, according to the U.S. Energy Information Administration, and is forecast to reach 5.7 million bpd this year.

Enbridge Inc. is once again rationing pipeline capacity, in a practice known as apportionment, on its Mainline system as Canadian output has risen. That system ships the bulk of Canadian crude exports to the United States.

Apportionment fell steeply last year when the Line 3 pipeline expansion opened and stopped entirely from March until July, but Enbridge has since started rationing capacity on its Mainline again. Crude deliveries into the Kerrobert, Saskatchewan, hub were apportioned by 2 percent in August and 6 percent in September, Enbridge said.