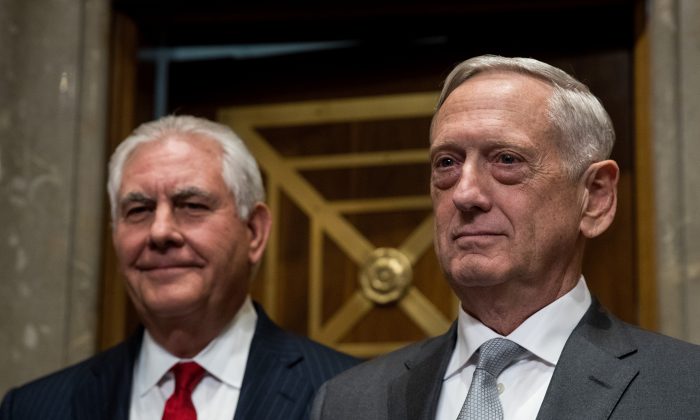 US President Has Authority to Strike North Korea With Nuclear Weapon, Top US Officials Say

The President of the United States has the authority to strike North Korea with a nuclear weapon without congressional approval if attacked or if an attack is imminent, two top U.S. officials said on Oct. 30.

Defense Secretary Gen. Jim Mattis said that the president has the responsibility to “protect the country.”

Mattis said under Article 2 of the Constitution, the president has the authority to strike North Korea in the scenario of a direct attack by the North or if an attack is imminent.

Article 2 states that “the President shall be Commander in Chief of the Army and Navy of the United States.”

The Constitution also states in Article 1 that only Congress has the power to declare war.

Testifying before the Senate Foreign Relations Committee on Oct. 30, Mattis said that in such a scenario Congress might not be consulted in the interest of time.

Secretary of State Rex Tillerson said that there are two cases when the president can take action. One is to protect United States persons, property, and national security interests.

The other case is for “circumstances that do not rise to the level of a declaration of war.”

“I think that is the circumstance we have in the Peninsula today in Korea,” Tillerson said.

According to Tillerson it is also important for the United States to retain the ability to strike first, as a deterrent.

“One of the strengths of the last 70 years has been the deterrence—the fact that no president, republican or democrat, has ever foresworn the first strike capability, that has served us for 70 years,” he said.

Sen. Chis Murphy (D-Conn.) has introduced a bill in Congress which would require a pre-emptive strike against North Korea to require congressional approval.

Tillerson said in his testimony that any change to the first strike deterrence option “does change—in a very material way—the deterrence, the strength of that deterrence.”

Military and intelligence officials believe that North Korea is just months away from finalizing its ability to deliver a nuclear warhead on a ballistic missile.

Tillerson admitted in the testimony before Congress, that the United States currently does not know exactly what North Korea’s strike capabilities are.

Both Tillerson and Mattis said they believe North Korea is the biggest national security threat that the United States currently faces.

In the actual event of an attack with a nuclear-armed missile by North Korea, the first thing that would happen is U.S. missile defense systems would track and try to take out the missile mid-flight.

Mattis said that these are located at sea, Alaska, and California. “They would do what they are designed to do,” he said.

Next, it would be up to the president how to respond to such an attack.

“We would take the action the president directed,” said Mattis.

U.S. allies in the region such as Japan and South Korea would be involved in a counter attack.

“We rehearse this routinely,” Mattis said.

The United States currently has three aircraft carriers under the command of the 7th Fleet, whose area of responsibility includes the Korean Peninsula, located in the Pacific.

On Tuesday, F-35 fighter jets arrived in Japan as part of the deterrence effort against North Korea.

Over the weekend the United States flew a nuclear strike-capable B-2 bomber over the Pacific.