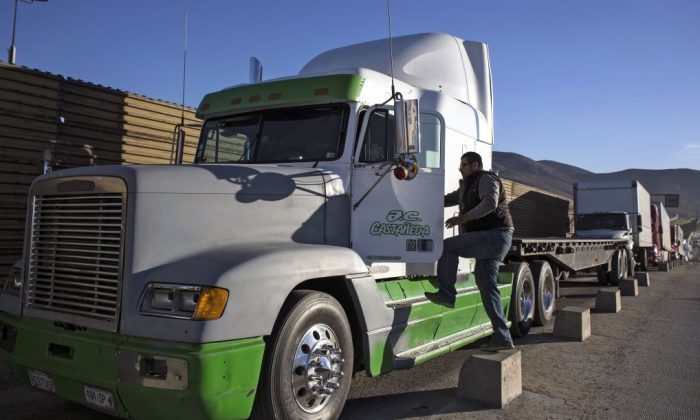 A driver climbs up his truck as he lines up to cross the border with the United States at Otay Mesa Commercial Port of Entry in Tijuana, Mexico on Jan. 22, 2018. (Guillermo Arias/AFP/Getty Images)
US News

Industry groups and state environmental officials have urged the EPA to set new nationwide rules as the state of California has been moving forward with plans to set new state emissions limits. California also wants nationwide rules, in part because more than half of all trucks delivering goods in the state are registered in other states.

The EPA said in a statement it had scheduled a formal announcement on Nov. 13 with industry executives and state environmental officials regarding its “Cleaner Trucks Initiative,” but did not immediately disclose details. The effort to impose a new regulatory limit by the EPA comes as the Trump administration has generally touted its efforts to eliminate regulations. But the effort on nitrogen oxide (NOx) is backed by industry, which wants to avoid a patchwork of federal and state standards, the official said.

The official asked not to be identified because the announcement was still pending.

In December 2016, the Obama-led EPA said in response to petitions to impose new standards that it acknowledged “a need for additional NOx reductions from on-highway heavy-duty engines, particularly in areas of the country with elevated levels of air pollution” and said it planned to propose new rules that could begin in the 2024 model year.

Local and state air quality and other agencies including in New York City, New Hampshire, Rhode Island, Los Angeles, and Washington state had petitioned for the rules.

Another administration official said Nov. 12 the new proposed emissions rules may not be written and announced until 2020.

Nitrogen oxide emissions are linked to significant health impacts and can exacerbate asthma attacks, the EPA has said.

The current heavy-duty truck rules for NOx were adopted in 2000 and took effect over the following decade.

In the aftermath of Volkswagen AG’s light-duty diesel emissions scandal, in which the German automaker admitted to secretly using software to evade emissions rules, the EPA has taken steps to insure that diesel cars and SUVs are meeting emissions requirements in on-road use.

The new NOx heavy-duty truck rules may also include new tests or other regulatory steps to ensure that vehicles and their engines are complying during real-world driving, the official said.