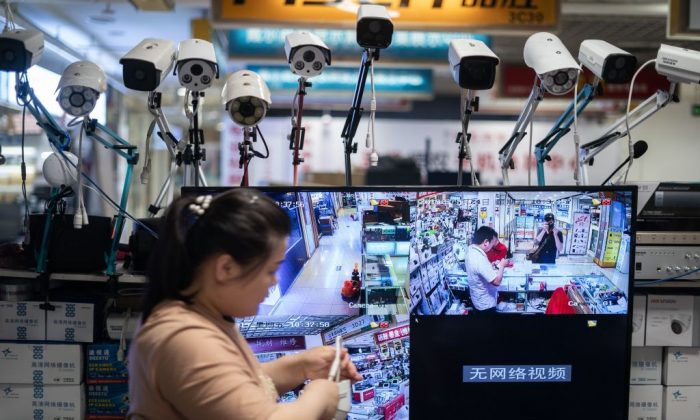 Picture of Hikvision cameras in an electronic mall in Beijing on May 24, 2019. (Fred Dufour/AFP/Getty Images)
US News

WASHINGTON—U.S. investment funds turn a blind eye to human rights records of Chinese technology companies such as Hikvision and Dahua Technology. They are among the entities blacklisted by the U.S. government for their involvement in human rights violations in China.

The Trump administration added 28 Chinese organizations to its “Entity List” on Oct. 7, effectively blocking them from buying U.S. technology. However, this doesn’t prevent U.S. investors from buying these companies’ shares.

The list includes eight leading artificial intelligence (AI) and video surveillance companies that “have been implicated in human rights violations and abuses in China’s campaign targeting Uighurs and other predominantly Muslim ethnic minorities,” according to the U.S. Department of Commerce.

Many Americans own shares in these companies through their retirement funds or various investment funds. Hence, they unwittingly finance China’s human rights abuses, according to China experts.

“For far too long we’ve let the Chinese Communist Party have access to the Western capital markets without requiring their companies to actually abide by the rules that all the other companies abide by,” said Robert Spalding, China expert and author of the book “Stealth War: How China Took Over While America’s Elite Slept.”

China treats corporate accounting records of Chinese companies as state secrets, barring overseas regulators from accessing them. Hence the majority of U.S. investors are unaware of the identities of these companies and whether they comply with U.S. laws.

“As the American people become aware that their retirement funds are going into companies that not only face material risk from a financial perspective but also support atrocities like concentration camps [and] forced organ harvesting of prisoners of conscience then they’re going to call on their political leaders to make a change,” Spalding said.

The Chinese Communist Party has reportedly detained more than a million Uyghur Muslims in reeducation camps in China’s northwestern region of Xinjiang. Besides Uyghurs, other religious groups and minorities in China—including Tibetan Buddhists, Christians, and Falun Gong practitioners—continue to suffer from systematic arrest, unlawful imprisonment, torture, and forced organ harvesting.

Among the companies blacklisted by the U.S. government are Hikvision and Dahua Technology, two of the world’s largest manufacturers of video surveillance products. They’re involved in the implementation of facial recognition technology used to monitor the populace throughout China. In particular, the two companies have won a total of more than $1 billion worth of state-backed surveillance projects in Xinjiang between 2016 and 2018, according to IPVM, a U.S. surveillance video research company.

Sanctions will bar U.S. companies such as Intel, NVIDIA, Western Digital, and Seagate from selling products and solutions to Dahua and Hikvision.

Hikvision, with a market value of about $42 billion, is the world’s largest video surveillance company. The company’s stock has risen more than fivefold since it started trading on the Shenzhen Stock Exchange in 2010. The shares, however, dropped more than 10 percent after the company came under scrutiny over its role in the mass surveillance of millions of Chinese citizens.

The U.S. Securities and Exchange Commission (SEC) “hasn’t been aggressive in policing this,” Spalding said, adding that the regulator has a responsibility to the American people when their money is invested in a company with a material risk or a company that has been placed on an entity list.

More Chinese companies may be added to the U.S. government’s blacklist.

Daniel Rosen, founder of the Rhodium Group, told Bloomberg on Oct. 8 that hundreds more Chinese companies have similar business profiles, and hence “this could spill over to them.”

“There’s a fairly hefty chunk of high tech activity here that has been impacted by this move, and I think it’s going to take a little while for people to sort it out. But it’s going to create some collateral damage, I think,” he said.

Other companies blacklisted include China’s leading AI firms such as SenseTime Group and Megvii Technology. Both companies specialize in facial recognition and are the most well-funded startups in that space.

Founded in 2014, SenseTime has become the world’s most highly valued AI company, with a current valuation of $4.5 billion, according to Forbes. The Hong Kong-based company raised a total of $2.6 billion from financial backers including U.S. technology investors Tiger Global and Silver Lake Partners, as well as mutual fund firm Fidelity, and technology firm Qualcomm.

The Massachusetts Institute of Technology (MIT) spokesperson told Bloomberg on Oct. 8 that the school would review its partnership with SenseTime after the company was added to the blacklist. In February, MIT announced that it had formed an alliance with SenseTime as part of an initiative to advance AI research. SenseTime was founded by MIT alumnus Xiaoou Tang.

The other leading AI company, Megvii, was founded in Beijing in 2011 and launched China’s first online facial recognition platform Face++ in 2012. Since then, the Alibaba-backed company raised more than a billion dollars from venture capital funds and reached a valuation of $4 billion in 2019.

In August, the company filed for an initial public offering (IPO) on the Hong Kong Stock Exchange and hired U.S. investment banks Goldman Sachs, Citigroup, and J.P. Morgan as joint sponsors of the planned IPO.

Goldman Sachs stated in an email that the bank was still “evaluating” its role in Megvii’s IPO “in light of recent developments.”

According to the financial data company Pitchbook, one of the backers of Megvii is the Chinese private equity firm BHR from which Hunter Biden, former Vice President Joe Biden’s son, recently said he would resign.

Some of these companies are public, and their stocks have become investment darlings for Western funds seeking high-growth assets.

The foreign capital inflows into Chinese stocks are expected to double this year as a result of the increase in Chinese stocks’ weighting in major indexes.

Early this year, global index provider MSCI announced that it would gradually quadruple the weighting of Chinese large-cap stocks in its global benchmarks this year. The firm also stated that it would add Chinese mid-cap stocks to its emerging market benchmark in November.

Media reports in September stated that Trump administration officials were looking into ways to limit U.S. investment in China, including removing listed Chinese companies from U.S. stock exchanges. White House trade adviser Peter Navarro, however, denied such reports, saying that there were no plans to block Chinese stocks.

Other reports, however, surfaced on Oct. 8 that the administration was now looking to scrutinize index providers’ decision to add Chinese firms. The White House didn’t respond to a request for comment.

“Of course we should punish those firms who are involved in human rights violations,” Dan David, whistleblower and activist short-seller wrote in an email. “We either hold our values to a standard or we don’t. It’s just that simple.”

David helped expose $15 billion in fraud in U.S. capital markets and had 12 Chinese companies de-listed from the exchanges. He was the main character in the “The China Hustle,” a documentary released in 2018 that explains how Chinese companies mislead U.S. investors.

“I have long held and lobbied that these companies are in fact material risks and are part of the catalyst for the documentary ‘The China Hustle,’” David wrote. “Fraud, IP theft, forced technology transfers, etc. are not illegal in China when perpetrated against an American firm. I would say that’s about as material risk as it gets.”

Some of the largest U.S. public pension funds own substantial shares in Hikvision, for example.

The New York State Teachers Retirement System (NYSTRS), which held 81,802 shares of Hikvision as of June, states that the fund is still “monitoring the situation.”

“Our holdings are primarily held according to their weights in passive portfolios matching the MSCI ACWI ex-U.S. index, our policy benchmark,” the fund’s spokesperson said in an email.

The California State Teachers’ Retirement System (CalSTRS), the nation’s second-largest pension fund, held 4.4 million shares worth $24.4 million as of June 30, 2018, according to the latest disclosure available.

“We are tracking the situation given this new development with the Department of Commerce’s announcement,” a spokeswoman for the CalSTRS told Reuters.