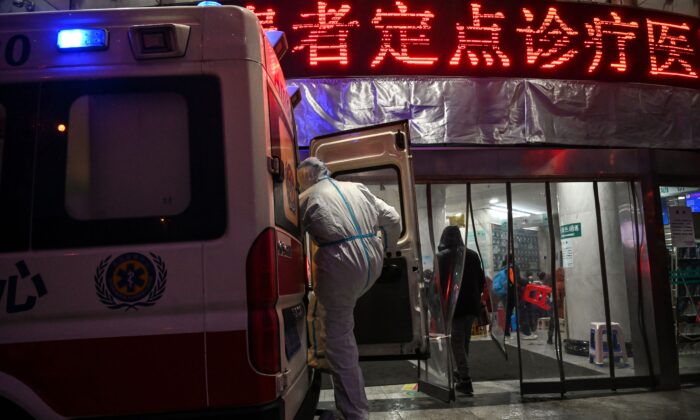 A medical staff member, wearing protective clothing to help stop the spread of a deadly virus that began in the city, boards an ambulance at the Wuhan Red Cross Hospital in Wuhan on Jan. 25, 2020. (Hector Retamal/AFP via Getty Images)
WORLD

US, Other Countries Scramble to Evacuate Citizens From Wuhan, Center of Viral Outbreak

The U.S. government will be sending a charter flight to evacuate American citizens and consular personnel out of Wuhan, the now-locked-down Chinese city where the deadly coronavirus outbreak first began, the State Department confirmed on Sunday.

A limited number of private citizens will be able to board a single flight “on a reimbursable basis” on Jan. 28 to leave Wuhan Tianhe International Airport for San Francisco, according to latest health alert update from the U.S. embassy website dated Jan. 26. Those interested can contact the U.S. embassy in Beijing with their personal information.

“This capacity is extremely limited and if there is insufficient ability to transport everyone who expresses interest, priority will be given to individuals at greater risk from coronavirus,” the statement read.

In China, thousands have been infected.

The virus has since spread to more than 12 countries and regions outside of China, causing two Americans to fall ill in Seattle and Chicago.

The World Health Organization said it “assesses the risk of this event to be very high in China, high at the regional level and moderate at the global level.”

Wuhan, home to 11 million people including around 1,000 U.S. citizens, was the first of 16 cities in China’s central Hubei province that has effectively come under quarantine. Currently, no buses, trains, or planes are going in or out of the city.

Photos circulating on Chinese social media showed Chinese officials inside Hubei and in nearby cities setting up roadblocks with bricks, rocks, and sand to prevent traffic flow. Excavators were mobilized on occasions to assist the effort. In one of them, a residential house in an unidentified village was sealed off with ropes. The red banner on the door read: “This household has migrants who came back from Wuhan, please don’t exchange visits.”

The United States has contracted a private transporter and the consulate is reaching out to all it knows in order to fly them out, The Wall Street Journal reported. The plane can take about 230 people each time.

The State Department has ordered all non-emergency personnel and family members to leave as of Jan. 23, according to its website. Details of the evacuation are still being finalized and are subject to change.

A spokesperson for the State Department told The Epoch Times on Saturday that the health and safety of U.S. citizens, including U.S. consulate workers in Wuhan, is its “top priority.”

There are currently limited emergency services available to U.S. citizens across Hubei province. The full range of consular services, such as visa applications, remain available at the U.S. Embassy in Beijing and U.S. consulates in Chengdu, Guangzhou, Shanghai, and Shenyang, according to the spokesperson.

The spokesperson said they “strongly encourage” U.S. citizens in China to enroll in the Smart Traveler Enrollment Program to receive notifications on any health and security alerts or government plans.

The State Department has updated the travel alert to level 4, warning citizens not to travel to Hubei, while the Centers for Disease Control and Prevention recommended travelers to exercise caution when visiting other parts of China.

At least 67 people from 22 U.S. states have been isolated for suspected pneumonia symptoms, including four in New York.

A Jan. 24 study by UK and U.S. researchers said the coronavirus could infect as many as 250,000 in the Chinese city of Wuhan alone in less than two weeks’ time.

Meanwhile, the Russian Embassy is also working with Chinese authorities on moving their citizens from Wuhan and from Hubei Province, Georgy Egorov, a press officer for the Russian Embassy in China, told Russian media RIA Novosti. He noted that there are no infections among Russian citizens.

Singapore’s Ministry of Foreign Affairs on Saturday said they were in contact with 35 Singaporeans living in Wuhan city, and so far, no one has reported illness. The country’s health officials have identified four cases of infection.

French automaker PSA, which manufactures Peugeot and Citroen brands, said on Saturday that it will expatriate 38 employees from Wuhan.

The foreign ministry of France has set up an emergency phone line for its nationals in China. The French foreign minister said on Jan. 25 that they are working with the Chinese side to set up a bus service allowing French citizens to leave Wuhan.

Two of three Chinese nationals carrying the coronavirus arrived in France without showing any immediate symptoms, according to officials.

Jordan’s King Abdullah II has also directed the evacuation of Jordanians from Wuhan “as soon as possible,” according to Jordan’s Petra state news agency. A plane is being organized for their extraction.

The Australian government has also said it is in discussions with the Chinese authorities to extract citizens from coronavirus-affected areas, local media reported.