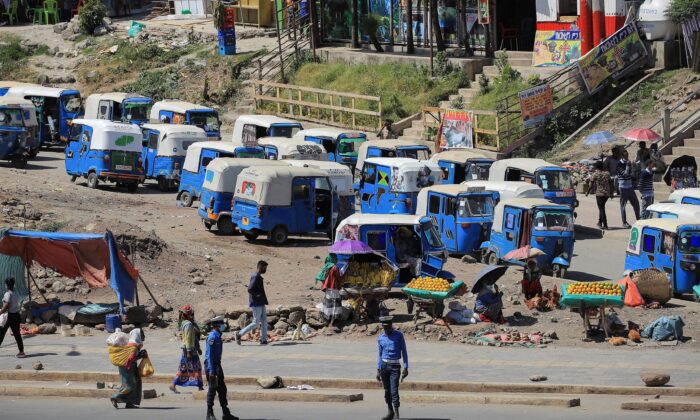 Traffic police are seen on duty at the Lafto neighbourhood in Addis Ababa, Ethiopia, on Nov. 5, 2021. (Tiksa Negeri/Reuters)
Africa

US Orders Non-Emergency Government Employees in Ethiopia to Leave

NAIROBI—The United States has ordered non-emergency U.S. government employees in Ethiopia to leave because of armed conflict, civil unrest and violence, its embassy in Addis Ababa said on Saturday.

Denmark and Italy also asked their citizens in Ethiopia to leave while commercial flights were still available, as rebellious Tigrayan forces and their allies have advanced towards the capital Addis Ababa.

Prime Minister Abiy Ahmed’s government, which has been embroiled in a year-long war against Tigrayan forces, has promised to keep fighting despite calls for a ceasefire from African nations, Western states and the U.N. Security Council.

“Incidents of civil unrest and ethnic violence are occurring without warning. The situation may escalate further and may cause supply chain shortages, communications blackouts, and travel disruptions,” the U.S. Embassy said on its website.

Government spokesperson Legesse Tulu and Abiy’s spokesperson Billene Seyoum did not immediately respond to requests from Reuters for comment.

Abiy’s government declared a national state of emergency on Tuesday, saying it was locked in an “existential war” with forces from the northern Tigray region and their allies.

The government spokesperson and the federal police spokesperson Jeylan Abdi did not immediately respond to Reuters requests for comment on Saturday.

On Thursday, police denied that arrests in the capital which followed the imposition of the state of emergency were ethnically motivated.

“We are only arresting those who are directly or indirectly supporting the illegal terrorist group,” police spokesperson Fasika Fante said, a reference to the TPLF. “This includes moral, financial and propaganda support.”

The TPLF unveiled an alliance with other factions on Friday aiming to remove Abiy from power, saying this would be done by force if needed.

The government condemned the move, saying Abiy had a mandate to rule based on a landslide election win in June. It urged international partners to help protect Ethiopia’s democracy.

The conflict in the north of Ethiopia started a year ago when forces loyal to the TPLF seized military bases in the Tigray region.

In response, Abiy sent troops, who initially drove the TPLF out of the regional capital but have faced a sharp reversal since June this year.

The TPLF and their allies told Reuters this week they were now in the town of Kemise in Amhara state, 325 km (200 miles) from the capital.

The government accuses the group of exaggerating its territorial gains.

Government spokesperson Legesse said there was fighting at least 100 km (60 miles) north of Shewa Robit, a town lying on a highway that links the capital to Ethiopia’s north. That suggests fighting has now erupted south of Kombulcha, one of two towns the TPLF said it captured last weekend.

The conflict has killed thousands of people, forced more than 2 million more from their homes, and left 400,000 people in Tigray facing famine.

Twitter said on Saturday it had temporarily disabled the Trends section of its service in Ethiopia, which showcases the most tweeted subjects, because of threats of physical harm.

“Inciting violence or dehumanizing people is against our rules … Given the imminent threat of physical harm, we’ve also temporarily disabled Trends in Ethiopia,” the company said.