US Official Urges EU to Use 5G Alternatives Over Huawei 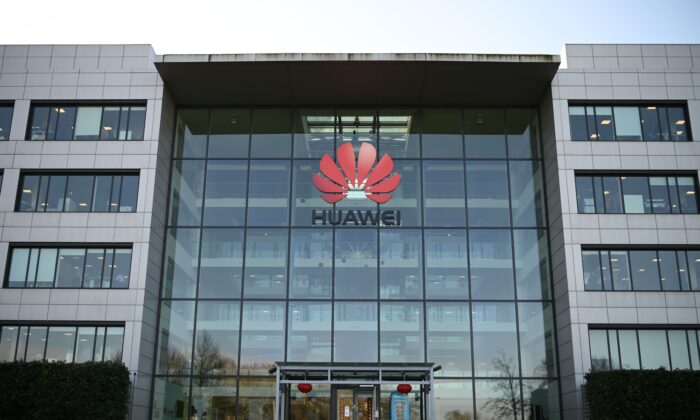 The logo of Chinese company Huawei is seen at its main UK offices in London, on Jan. 28, 2020. (Daniel Leal-Olivas/AFP via Getty Images)
By Bowen Xiao

At least three U.S. officials have publicly made comments in recent weeks about the risks of using China’s Huawei Technologies for 5G infrastructure, with the latest coming from a senior U.S. diplomat who voiced concerns about European countries using the technology.

Robert Strayer, deputy assistant secretary for cyber and international communications and information policy at the State Department, said the United States is encouraging European countries to think carefully about the security and economic implications of rushing forward with using Huawei’s technology.

“There is no way to fully mitigate any type of risk except the use of trusted vendors from democratic countries,” Strayer told reporters on a visit to Lisbon, Portugal.

Strayer also said it was “necessary to demystify” the notion that Huawei is more advanced in 5G. Huawei was founded in 1987 by a former People’s Liberation Army engineer, and Washington has repeatedly asked allies to not use Huawei’s technology over fears it would help China steal secrets from and spy on the West. Huawei and Beijing have both denied the accusations.

“The good news is Ericsson, Nokia, and Samsung all provide 5G technology that is on par with the one Huawei is providing today,” Strayer said. “They are leading the world in the type of technology they have.”

Strayer’s comments echo those made earlier this month by Attorney General William Barr, who said there were only two companies that can properly compete with Huawei as 5G infrastructure suppliers: Nokia and Ericsson.

“They have quality, reliable products that can guarantee performance,” Barr said at a keynote address at the Department of Justice’s China Initiative Conference. “They have proven successful in managing customers’ migration from 4G to 5G.”

Barr said the main concern was that the two suppliers don’t have enough resources or backing behind them to match Huawei’s scale. He suggested the United States use its resources to back one or both of the firms, adding that it would “make it a more formidable competitor and eliminate concerns over its staying power.”

“We and our closest allies certainly need to be actively considering this approach,” he said.

Huawei says it spent $15 billion in 2019 on research to help it achieve market leadership and has said the United States wants to frustrate its growth because no U.S. company could offer the same range of technology at a competitive price.

Strayer said Western vendors such as Ericsson and Nokia will use an open architecture with more functionality, creating opportunities for companies in the United States and Europe to provide compatible equipment.

Experts told The Epoch Times previously that it would be a good move by the United States to promote competitors to Huawei.

Robert Blair, White House special representative for international telecommunications policy, said at the Munich Security Conference in Germany that the United States could potentially develop partnerships with the telecoms industry as a bid to create an alternative to Huawei.

China currently dominates the global 5G technology market, capturing 40 percent through companies Huawei and ZTE. 5G is the next generation of mobile network technology, which will offer internet connectivity at speeds that are 10 to 100 times faster than 4G. The jump in network speed is set to revolutionize many industries, including transportation, health care, and manufacturing.

“Great respect to Attorney General Barr, but we believe the best way forward is what Ajit Pai announced just over the last several days,” Pence said, referring to the Federal Communications Commission chairman’s efforts to free up more spectrum for 5G wireless use.