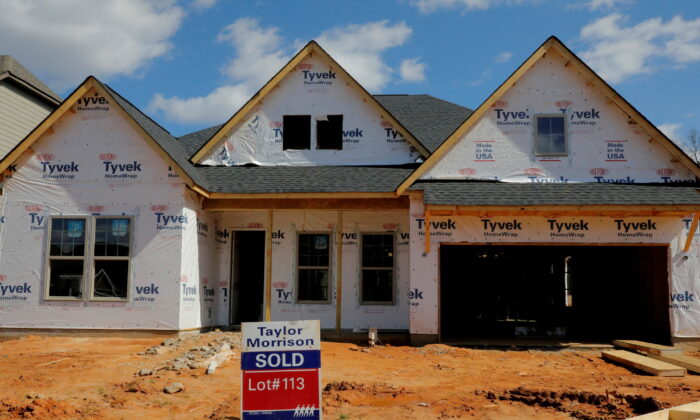 A home under construction stands behind a "sold" sign in a new development in York County, S.C., on Feb. 29, 2020. (Lucas Jackson/Reuters)
Economy

WASHINGTON—Sales of new U.S. single-family homes unexpectedly fell in February amid rising mortgage rates and higher house prices, which are squeezing out some first-time buyers from the market.

Despite the second straight monthly decline reported by the Commerce Department on Wednesday, sales remained above their pre-pandemic level. Economists saw reduced affordability curbing activity in the near-term, but expected the new housing market to plod along this year given pent-up demand, a record low inventory of previously owned homes and strong wage gains.

“With interest rates climbing further because of the negative supply shock emanating from the Russian invasion of Ukraine, home sales are likely to trend lower in coming months,” said David Berson, chief economist at Nationwide in Columbus, Ohio. “But unless mortgage rates spike or the economy stalls or worse, the falloff in new home sales should be modest.”

New home sales decreased 2 percent to a seasonally adjusted annual rate of 772,000 units last month. January’s sales pace was revised down to 788,000 units from the previously reported 801,000 units. Sales surged 59.3 percent in the Northeast and increased 6.3 percent in the Midwest. But they fell 1.7 percent in the densely populated South and tumbled 13.0 percent in the West.

New homes are a leading indicator for the housing market as they are counted at the signing of a contract.

Economists polled by Reuters had forecast new home sales, which account for 11.4 percent of U.S. home sales, would rebound to a rate of 810,000 units. Sales declined 6.2 percent on a year-on-year basis in February. They peaked at a rate of 993,000 units in January 2021, which was the highest since the end of 2006.

Mortgage rates surged in February and have continued to push higher after the Federal Reserve last week raised its policy interest rate by 25 basis points, the first hike in more than three years, and laid out an aggressive plan to push borrowing costs to restrictive levels by 2023.

Stocks on Wall Street were trading lower as oil prices rose. The dollar gained versus a basket of currencies. U.S. Treasury yields fell.

“Mortgage payments as a share of median family income have risen above 20 percent for the first time since late 2007,” said Matthew Pointon, senior property economist at Capital Economics in New York. “That will act to cool housing market activity. A record low number of existing homes on the market that implies new sales will grind out a small gain over 2022.”

The median new house price in February increased 10.7 percent from a year ago to $400,600. House prices have risen 31 percent compared to three years ago. None of the houses sold last month were below $200,000. Strong house price growth is expected to persist through this year and into 2023.

“We may be approaching a pivot point when higher home costs and higher mortgage rates cool both sales and price increases, but given the supply-and-demand imbalance, we may not hit that point this year,” said Robert Frick, corporate economist at Navy Federal Credit Union in Vienna, Virginia.

There were 407,000 new homes on the market, the highest since August 2008 and up from 398,000 units in January. Houses under construction made up 65 percent of the inventory, with homes yet to be built accounting for about 26 percent.

The backlog of homes approved for construction but yet to be started is at an all-time high as builders struggle with shortages and higher prices for inputs like lumber for framing, as well as cabinets, garage doors, countertops, and appliances.

At February’s sales pace it would take 6.3 months to clear the supply of houses on the market, up from 6.1 months in January.