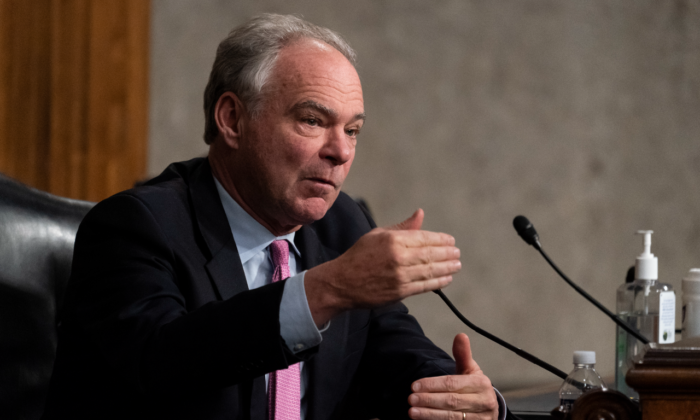 US Must Provide Alternative to Rising Chinese Influence in Latin America: Lawmakers

The Chinese Communist Party (CCP) is expanding its footprint in Latin America, using economic enticements, propaganda, and infrastructure projects with hidden price tags to influence the governments and populations in the region, U.S. lawmakers and officials described at a March 31 Senate subcommittee hearing.

Senator Marco Rubio (R.-Fla.) said that, contrary to CCP rhetoric, Beijing does not expand its presence in Latin America with a view to promoting stability and economic development, but to build Chinese influence and to foster dependence on the regime.

“The CCP is taking advantage of its economic importance and political relationships to encourage governments across the region to make decisions that favor the CCP and undermine democracy and free markets,” Rubio said at a subcommittee hearing of the Senate Foreign Relations Committee.

Senator Tim Kaine (D-Va.) provided an account of a trip he took last year with a bipartisan group of fellow lawmakers to Mexico, Ecuador, Columbia, and Guatemala. In the course of the trip, they surveyed a region devastated by COVID-19 and desperately hoping for vaccines as well as a stronger American presence, he said.

“But we also saw how China has increased its own engagement throughout the region, accompanied by an aggressive public diplomacy campaign promoting Chinese propaganda,” the lawmaker said.

“China pushes the narrative that it’s a benevolent patron or a template for long-term economic development and social stability. The Chinese genocide against the Uyghur people and harassment of Uyghurs abroad clearly shows the rest of the world what its vision of social stability looks like,” he continued.

In Kaine’s view, the Coca Codo Sinclair Dam in Ecuador, financed and built by China, stands as an example of Beijing’s approach to wooing governments in the region with the promise of projects whose long-term costs the local officials may not fully comprehend. He described Rafael Correa, Ecuador’s president from 2007 to 2017, as a politician who bought into Chinese promises and pledged to modernize Ecuador with the help of the regime. As part of the deal, Beijing would provide loans and infrastructure projects in return for Ecuador’s oil.

Today, six years after its opening, Ecuador is saddled with a dam that is still not fully operational, questionably situated next to an active volcano, Kaine said. The dam has required over 7,000 repairs which have still not stopped erosion, and in 2020 it was the cause of an oil spill that has posed dangers for indigenous peoples living downstream from the Coca Coda Sinclair project, for which Ecuador still owes China billions of dollars, Kaine added.

As China continues its aggressive pursuit of lithium deposits in Argentina, Bolivia, and Chile, and copper in Peru, those nations need to consider the example of Ecuador, Kaine warned.

“Beyond its economic engagement, we know that China wants to increase diplomatic and security engagement, [as part of] an effort to exert soft power,” Kaine said.

Kaine added that he and his colleagues often hear from political leaders in Latin America and the Caribbean that they would rather work with the United States than China, but it is the latter power that puts itself forward aggressively in the region.

Kerri Hannan, deputy assistant secretary of state for public diplomacy, policy, planning, and coordination, described the effort that she and her colleagues have undertaken to help women entrepreneurs, introduce businesses and the public to the economic opportunities that U.S. agencies can help foster. The United States is also working to counter CCP propaganda in Latin America as well as pushing back against Beijing’s efforts to get the handful of South American countries that diplomatically recognize Taiwan to switch their recognition to China.

Hannan described an active Chinese campaign of “propaganda and disinformation” in the region, including, in recent weeks, disinformation about Russia’s invasion of Ukraine.

Hannan noted the existence of 63 Confucian Institutes throughout Latin America. These Beijing-funded language centers have been widely criticized for their role in promoting CCP propaganda and silencing free academic discourse on college campuses around the world.

But to call out the CCP’s role in spreading propaganda in the nations of Latin America and the Caribbean does not capture the full extent of the problem. Hannan noted the issue of the regime’s ties with figures in the media industry, skewing China-related coverage in the region.

“They have established media cooperative agreements with partners [in Latin America], and we have seen journalists self-censor or be encouraged by embassy officials not to tell the truth or shine a light on PRC [People’s Republic of China] activities,” Hannan said.

In light of the CCP’s efforts to quell independent inquiry into its various activities, the United States has fostered programs aimed at bolstering the resilience of civil society and investigative journalists in particular, as well as pushing back against CCP propaganda, according to Hannan.

The economic woes of the region, compounded by the pandemic, may partly explain why some governments and businesses have proven so susceptible to Chinese loans. Like Kaine, Hannan highlighted the urgency of providing economic opportunities that might prove more alluring to entities in the region than those that Beijing peddles.

“There’s $150 billion of infrastructure deficit in the region right now, and low-cost state-backed loans are very appealing to our partners. We focus on [fostering] an investment climate where U.S. and trusted private-sector-led investments can take place,” she said.

Andrew Herscowitz, chief development officer at the U.S. International Development Finance Corporation (DFC), outlined his agency’s role in providing financing to businesses in Latin America and the Caribbean, with a view to alleviating the persistent inequality and “pressing development needs” that characterize the region. His agency specializes in providing equity investments, loans, loan guarantees, and political risk assessments, with a particular focus on credit to foster economic growth.

“While the PRC largely finances the work of Chinese companies, the DFC provides financing directly to the people and businesses of Latin America and the Caribbean,” Herscowitz said.

“The PRC prioritizes only the prosperity of the PRC, often to the detriment of the local people. The DFC helps cement market reforms and the rule of law,” he added.

Peter Natiello, senior deputy assistant administrator in the U.S. Agency for International Development’s (USAID) Latin America and Caribbean bureau, highlighted the prominent role of USAID in providing COVID-19 relief. He noted that USAID has provided 65 million vaccine doses in the countries that his purview includes. No other country has delivered so many in the region, Natiello said.

“Governments and citizens are increasingly aware of the downsides of working with the Chinese, while trust in the U.S. is growing” as a result of USAID efforts, Natiello commented.