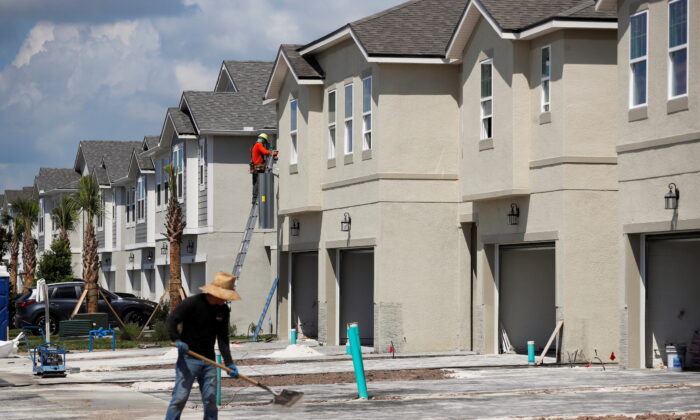 A carpenter works on building new townhomes in Tampa, Fla., on May 5, 2021. (Octavio Jones/Reuters)
Markets

The average interest rate on the most popular U.S. home loan rose above 6 percent for the first time since 2008 and is now more than double the level it was one year ago, Mortgage Bankers Association (MBA) data showed on Wednesday.

Rising mortgage rates are increasingly weighing on the interest-rate sensitive housing sector as the Federal Reserve pushes on with aggressively lifting borrowing costs in order to tame high inflation. The central bank has raised its benchmark overnight lending rate by 225 basis points since March.

Expectations for Fed tightening have led to a surge in Treasury yields since the start of this year. The yield on the 10-year note acts as a benchmark for mortgage rates.

The average contract rate on a 30-year fixed-rate mortgage rose by 7 basis points to 6.01 percent for the week ended Sept. 9, a level not seen since towards the end of the financial crisis and Great Recession.

A worse-than-expected key inflation reading on Tuesday cemented expectations the Fed will be forced to deliver a third straight 75-basis point interest rate hike at its policy meeting next week, with investors now predicting the central bank will have to hike rates faster and further than previously thought.

The impact of higher interest rates is being felt across the housing sector. New home sales plunged to a 6.5-year low in July while home resales and single-family housing starts are at two-year lows. But house prices remain elevated amid a critical shortage of affordable homes, making a housing market collapse unlikely.