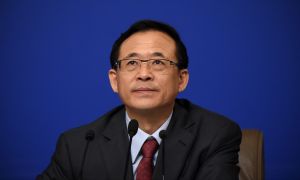 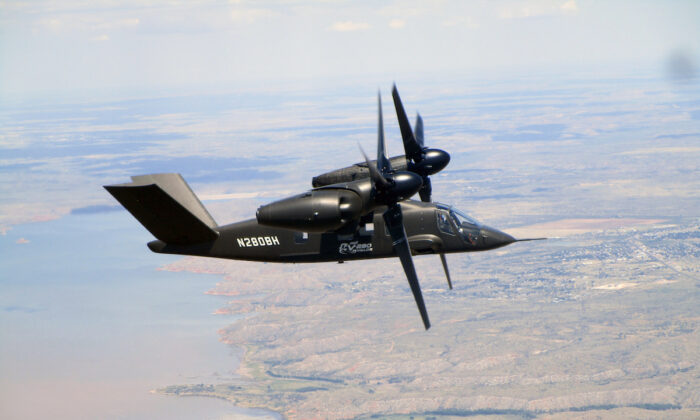 The Bell V-280 Valor participated in flight tests in Amarillo, Texas, in July 2018. (Photo courtesy of Bell)
US News

US Military Taps Spirit of Free Enterprise to Counter China

With the Chinese military looming ever larger in the rearview mirror, the United States military is increasingly turning to the spirit of tech startups to boost clear of Beijing’s state-owned, light-fingered tech companies.

National security analysts are calling on the government for a “moonshot” effort to harness old-fashioned American free-market enterprise to counter Chinese tech that is already a match in fields such as AI, cloud computing, and hypersonic.

The Army Futures Command (AFC), tasked with modernizing the army, was set up in 2018 near the tech hub of Austin, Texas, precisely to increase collaboration with the tech community and incorporate approaches outside of the traditional defense acquisition cycle.

AFC is also ditching historically risk-averse acquisition culture to get prototypes into the hands of soldiers faster, speeding up the cycle in an era when the latest tech can be outmatched in months, not decades.

In September, a Council of Foreign Relations report called for a “moonshot” approach. Defense analysts last week told members of the House Armed Services Committee that firing up the engine of U.S. tech innovation with free-market enterprise was key to outpacing the threat from China.

Left With No Choice

“The U.S. Department of Defense has no choice but to draw upon the expertise and R&D of our own high-tech companies in the face of what China is doing with its numerous Fortune 500 level firms, many of which are directly owned by the Chinese Communist Party,” Dr. Robert J. Bunker, Adjunct Research Professor, Strategic Studies Institute, U.S. Army War College, told the Epoch Times.

“The defense acquisition cycle is much slower than the commercial product development cycle,” said Bunker.

“The same goes for foreign companies, such as Huawei with an R&D budget of $15 billion in 2018—a company which serves as a trusted agent of the CCP regime.”

There are certain drawbacks to the collaboration with tech companies away from the typical defense contractors, says Bunker.

“The technology is not military spec concerning safety, ruggedness, and security,” he said. “It kills service personnel, service personnel will break it, and an opposing force can compromise it such as exploiting a flaw to take control of it or compromise a military network.”

In 2018, the Army Futures Command was established to orientate the army away from a counter-insurgency outfit kitted out with 20th-century gear, toward an ever-evolving 21st-century machine able to outwit China and Russia.

On Oct. 16, the AFC published the 2019 Army Modernization document (pdf). In addition to sketching out a 16-year time-frame, the plan provided an update on a key element—the embrace of the tech community.

“When AFC was stood up, one of the intents was that it leverages all of the innovators that are out there that traditionally we have not looked to,” Colonel Eric Smith, who was responsible for writing the strategy, told The Epoch Times.

Smith says that the involvement of the broader tech community isn’t so much a shift away from the larger defense universe, but, “more an attempt to cast the net a little wider.”

“I wouldn’t say it is THE answer,” he said. “I would look at it more as leveraging our strength as a market-based, open society.”

A traditional defense program might span two decades from inception to final delivery, says Smith, painstakingly ensuring that a flawless system was put in the hands of the soldiers.

But AFC isn’t worried about getting the kit perfect, but getting it early.

“Our buzzword is that we are attempting to ‘move the risk to the left,'” says Smith, referring to a phrase that started its life in the software community, which means to focus on weeding out unworkable options earlier. In other words, to try to fail early.

“Technology is moving so fast, and we don’t totally understand at the point of inception, what the end stage uses and capabilities of the technology are,” says Smith. “So it would be better for us to buy something upfront, try it, put it into the hands of soldiers, and then make a decision early.'”

But reaching out to the tech community for a tonic risks bolstering the cancer of Chinese military tech as well, which has partly relied on the theft of cutting edge U.S. technology from the very same sources.

Smith acknowledges this is one of the security concerns.

“If you rewound it 20 to 30 years, and asked where you would focus your security, you would say on the political areas around Washington,” he says. “Whereas now… where is our adversary? Our adversary is going to Silicon Valley and to Boston Massachusetts so that they can get the technologies.”

“China’s technology theft for military gain is staggering,” Secretary of Defense Mark Esper said in September, as he warned Europe not to get too cozy with Beijing.

On July 23, FBI Director Christopher Wray told senators that the agency has more than 1,000 active investigations into theft of U.S. intellectual property, “almost all leading back to China.”

“The current FBI caseload of 1,000 is a fraction of the actual volume of theft committed by the Chinese Communist Party,” Fleming said.

Lawmakers are waking up to the threat.

A new bill to prevent Chinese spies from stealing sensitive U.S. technology at academic institutions was introduced on Oct. 29.

But killing off this cancer without paying attention to the underlying strength of the patient could be unwise, some analysts warn.

Former Senator Jim Talent is co-chair of a task force set up by the Reagan Institute to focus on national security and innovation.

In testimony to the House Armed Services Committee on Oct. 30, Talent said that there is a constant tension between technology acquisition and security.

Using a football analogy, he framed it as a question of defense or offense, saying the United States should err more on the side of offense.

“I think we’re going to win on offense.”

Talent said that there needed to be a shift from the risk-averse culture typical of previous defense acquisition.

“If you want breakthroughs you have to take a gamble on technology by definition that isn’t already proven, which means that you have to make investments that are a bit riskier than the government is used to making which means you have to be prepared to fail sometimes.”

“If 5 or 10 years from now, all of their experiments have succeeded, they are probably not experimenting enough.”

But that shift in culture will need lawmakers to send a clear message to stakeholders that their support will not waiver when things go wrong.

“Congress needs to send a message—that they will have their back.”

Talent floated a suggestion made by some European counterparts on how to handle the tension between innovation and security. Rather than building lots of small security walls, he said, they had suggested to “build bigger walls around fewer things.”

Calling for a ‘Moonshot’

Also giving testimony to the House Armed Services Committee was Michele Flournoy, Former Under Secretary of Defense for Policy.

She warned that China’s theory of victory increasingly rests on “systems destruction warfare,” which she describes as an attempt “to take out and cripple an adversary’s networks at the outset of conflict.”

“America’s military advantage is rapidly eroding in light of China’s (and to a lesser extent Russia’s)  military modernization efforts,” she said.

“Thanks to Beijing’s doctrine of civil-military fusion—in which any commercial or research-based military advance that has military applications will be shared with the PLA—the Chinese military has made rapid advancements in AI and machine learning in particular.”

“Ensuring that the U.S. military keeps its edge means that we have to have our answer to that civil-military fusion.”

“This is a moonshot moment for the United States,” said Flournoy. “We need national leaders with a vision. We need an urgent call to action, and we need a far more robust and focused investment in the drivers of our competitiveness.”

A report by the Council on Foreign Relations in September which looked more broadly at innovation and national security, also called for a moonshot approach to the challenge.

“In 2015, for the first time since World War II, the federal government provided less than half of all funding for basic research,” said the report.

In contrast, as well as tripling military spending in 15 years, Beijing has increased its R&D expenditures by an average of 18 percent annually since 2000, notes the report.