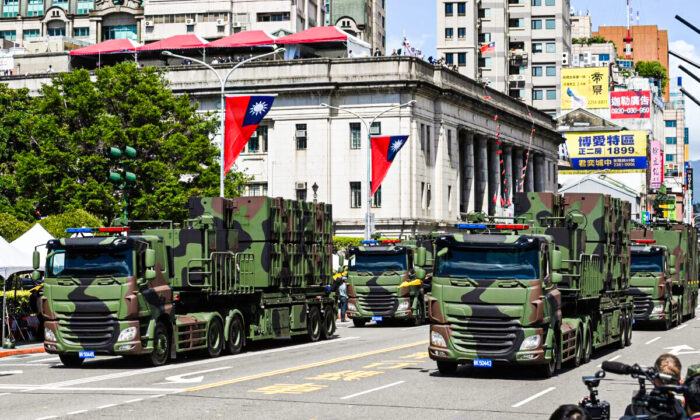 TAIPEI, Taiwan—A group of U.S. congressmen arrived in Taiwan on a military plane on Nov. 9, marking the third U.S. delegation to visit the self-ruled island since President Joe Biden took office in January.

At the time of writing, it is unclear which lawmakers are in Taiwan and how many of them are there. The surprise visit was first confirmed by Taiwan’s foreign ministry before the Pentagon confirmed it hours later during a briefing.

“Congressional delegation visits to Taiwan are fairly routine,” Pentagon spokesperson John Kirby told reporters on Tuesday. “It is not uncommon for them to be transported on U.S. military aircraft.”

Kirby described the visit as a “normal practice” by the U.S. government under the Taiwan Relations Act (TRA), a U.S. law that requires Washington to provide the island with military equipment for its self-defense.

Currently, Washington and Taipei are not formal diplomatic allies.

According to Taiwanese media, the congressmen arrived on a U.S. C-40 Clipper military transport plane.

The Chinese regime—which sees Taiwan as a part of its territory and opposes governments and international organizations for making any official contacts with the Taiwanese government—was angered by the visit.

Tan Kefei, spokesperson for the regime’s defense ministry, condemned the visit and accused the United States of having “grossly interfered in China’s internal affairs,” in a written statement.

Tan also threatened Taiwan’s ruling Democratic Progressive Party, warning that it shouldn’t make any “wrong judgment” or “it will only bring serious disaster to the island.”

China has threatened war against Taiwan to bring it under its reign. In October, Taiwan’s defense minister warned that China will be capable of mounting a full-scale invasion of the island by 2025.

China’s warmongering attitude was repeated in the country’s state-run media. On Nov. 10, China’s outlet CTGN, the international arm of state broadcaster CCTV, stated that “China is continuing to improve its combat readiness and capabilities to back up its will on the island with the threat of force,” in its commentary article on the visit.

“The U.S. may be willing to touch down a plane on the island to posture, but is it ready to commit itself to a devastating war to save it?” the article asked.

On Oct. 27, Biden told East Asian leaders at a summit that the United States had a “rock-solid” commitment to Taiwan.

Taiwan’s Premier Su Tseng-chang, when asked by local reporters about the visit on Nov. 10, said that “Taiwan–U.S. relations are very important,” without providing details of the U.S. visit.

In June, a congressional delegation consisting of three senators—Tammy Duckworth (D-Ill.), Christopher Coons (D-Del.), and Dan Sullivan (R-Alaska)—visited Taiwan to announce that the United States would donate 750,000 COVID-19 vaccine doses to the island. They arrived in Taiwan on a U.S. military C-17 transport plane.