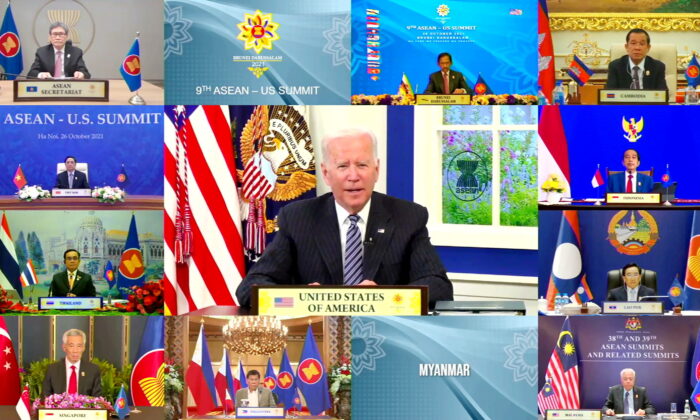 President Joe Biden, at a summit of East Asian leaders on Oct. 27, said the United States was deeply concerned by the Chinese regime’s “coercive” actions in the Taiwan Strait.

His comments came weeks after Beijing deployed a record number of aircraft into Taiwan’s air defense zone, prompting sharp protest from the self-ruled island and the United States.

Speaking at the virtual event also attended by Chinese Premier Li Keqiang and other regional leaders, Biden reiterated that the United States had a “rock-solid” commitment to Taiwan.

“We are deeply concerned by China’s coercive … actions,” Biden said, charging that they “threaten regional peace and stability.”

“The U.S. is committed to Taiwan. In fact, that commitment is rock solid and consistent across administrations. It continues to be the maintenance of peace and stability across the Taiwan Straits and within the region,” he said.

Under the Taiwan Relations Act from 1979, the United States has an obligation to provide Taiwan with the means to defend itself. The Chinese regime views Taiwan as its own territory to be taken by force, if necessary.

The president stirred controversy last week when he said the United States had a “commitment” to defend Taiwan if the Chinese regime attacked. This is because those comments departed from a longstanding U.S. policy of “strategic ambiguity” under which Washington is deliberately vague on how it would respond to such a scenario.

The White House later said Biden was not signaling a change in U.S. policy toward Taiwan, while some analysts said that Biden had simply misspoken.

At the beginning of October, the Chinese regime sent nearly 150 military aircraft over Taiwan’s air defense zone over a four-day period, in what analysts described as part of an ongoing campaign to intimidate both the island and its international partners.

Biden at the summit also reaffirmed Washington’s commitment to ensure a free and open Indo-Pacific, without mentioning China, according to a White House readout. In recent months, the United States has ramped up alliance-building, including co-establishing a new trilateral security partnership known as “AUKUS” in the region where Beijing is increasingly flexing its military and economic might.