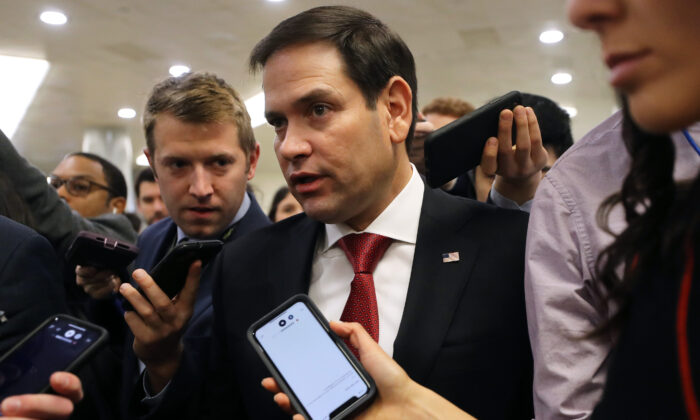 U.S. lawmakers and experts have expressed concern over the United Kingdom’s decision to allow Huawei a limited role in its 5G network, saying it endangers national security.

The UK government granted the Chinese telecom giant a role in building non-sensitive parts of its next-generation wireless network on Jan. 28.

Huawei, however, was classified as a “high-risk vendor,” meaning it would be excluded from the sensitive core, where data is processed, and barred from all critical networks and sensitive locations such as nuclear sites and military bases. As a high-risk company, its involvement would be capped at 35 percent.

The decision came despite repeated warnings from the United States that Huawei’s equipment could be used by the Chinese regime for spying or to disrupt communication networks. Such concerns stem from the company’s close links with the military, and that Chinese law compels companies to cooperate with intelligence agencies when asked.

U.S. officials had also previously said that such a decision would jeopardize intelligence sharing between the two nations. The UK and the United States are part of the Five Eyes intelligence-sharing network, which also includes Australia, Canada, and New Zealand. Both Australia and New Zealand have banned Huawei from its 5G rollout, while Canada is currently still making its decision.

However, British Foreign Secretary Dominic Raab said on Jan. 28 that intelligence-sharing would not be impacted.

“How we construct our 5G and full fiber public telecoms networks has nothing to do with how we will share classified data,” Raab told lawmakers after a meeting of the National Security Council chaired by Prime Minister Boris Johnson. “Intelligence-sharing will not be put at risk.”

Johnson and President Donald Trump spoke by phone shortly after the British decision was made public.

“The Prime Minister underlined the importance of like-minded countries working together to diversify the market and break the dominance of a small number of companies,” the British government said in a statement.

Speaking before the call, a Trump administration official said: “There is no safe option for untrusted vendors to control any part of a 5G network.

“We look forward to working with the UK on a way forward that results in the exclusion of untrusted vendor components from 5G networks.”

A British official, speaking on condition of anonymity, said excluding Huawei would have delayed 5G and cost consumers more, echoing warnings from the telecommunications industry.

5G’s much faster data speeds and increased capacity will make it the foundation stone of many industries and a driver of economic growth.

U.S. lawmakers expressed disappointment with the UK’s decision, with several calling for a review of intelligence-sharing with Britain.

“Allowing Huawei to … build the U.K.’s 5G networks today is like allowing the KGB to build its telephone network during the Cold War,” Sen. Tom Cotton (R-Ark.) wrote in a statement.

“The Chinese Communist Party will now have a foothold to conduct pervasive espionage on British society and has increased economic and political leverage over the United Kingdom.”

Sen. Marco Rubio (R-Fla.), in an email to The Epoch Times, said the “misguided” decision ignores the “considerable expenditure required to mitigate the risk of Huawei’s involvement.”

“While Chinese subsidies lower the initial price tag of Huawei, the long-term costs to security and in allies’ trust are high,” Rubio said, adding that the United States should reevaluate economic and intelligence cooperation with Britain.

Sen. Mark Warner (D-Va.), vice chairman of the Senate Intelligence Committee, said in a statement that he was “disappointed” by the decision, adding that the United States remained committed to working with its allies such as the UK to build alternatives to Huawei.

Sen. Ben Sasse (R-Neb.), in a statement, said, “Here’s the sad truth: our special relationship is less special now that the UK has embraced the surveillance state commies at Huawei. During the Cold War, Margaret Thatcher never contracted with the KGB to save a few pennies.”

“The UK is siding with a totalitarian regime,” Spalding told The Epoch Times affiliate NTD. “Not because … they believe wholeheartedly that they have no concerns, but rather because one of their main companies British Telecom, is saying, we need the subsidy from China so that we can have cheap equipment.”

Spalding rejected the distinction between “core” and “edge,” saying the risk remains the same as both parts of the network are primarily software-based.

“The idea that any part of that [software-based ecosystem] can be considered a safe area for technology to be introduced, where you have a concern about who’s introducing that technology—I think that’s incorrect,” he said.

“I think they [the UK] are willfully trying to stay ignorant of what the possibilities are [if Huawei is introduced] because it’s too hard to accept the fact that there is no security in data anymore.”

He warned that certain sectors, such as the tech and telecom industries, due to their desire for cheap products from China, “are putting pressure on the governments of democracies to continue this behavior that is really counter to the national security interests, and the freedoms and liberties of the people in the societies in which they live.”