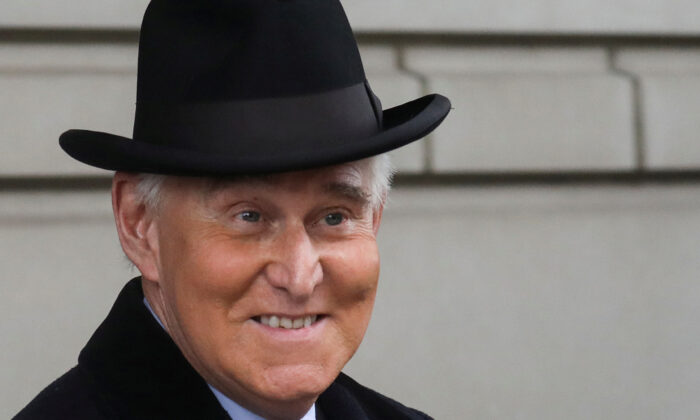 Former Trump campaign adviser Roger Stone departs after he was sentenced to three years and four months in prison for charges that include lying to Congress, obstruction of justice and witness tampering, at U.S. District Court in Washington, U.S., Feb. 20, 2020. (Leah Millis/Reuters)
By Isabel van Brugen

A federal judge on April 16 ruled that President Donald Trump’s longtime friend and former adviser, Roger Stone, will not be granted a new trial, saying that his legal team’s claim that the jury forewoman is tainted by political bias “is not supported by any facts or data and it is contrary to controlling legal precedent.”

Stone, 67, was sentenced on Feb. 20 to three years and four months in prison at a federal court in Washington on charges including lying to a congressional committee that was investigating Russian interference in the 2016 U.S. election.

His lawyers filed a motion for a retrial after raising concerns about a juror’s political leanings, alleging that she lied on a questionnaire during panel selection.

In an 81-page decision, U.S. District Judge Amy Berman Jackson of the District of Columbia rejected Stone’s claim that the forewoman was biased against the president and therefore could not be impartial in deciding Stone’s guilt or innocence during the trial.

Stone’s request for a new trial “is a tower of indignation, but at the end of the day, there is little of substance holding it up,” Jackson said in her opinion.

His charges stemmed from then-special counsel Robert Mueller’s investigation into Russian interference in the 2016 election. Ultimately, Mueller found no evidence of collusion between Trump’s campaign and the Kremlin. Also, during a later trial, prosecutors said Stone collaborated with WikiLeaks to release Democratic Party emails during the 2016 campaign.

Stone is now expected to ask an appeals court to throw out his conviction. Jackson’s order says Stone has 14 days from Thursday’s ruling to file an appeal or report to serve his sentence at the institution designated by the Bureau of Prisons.

Requests for a new trial followed the emergence of anti-Trump social media posts made by Hart shortly before Stone’s filing. Some of the posts clashed with her assertions to the court that she didn’t “pay that close attention” to the probe into Russian interference in the 2016 election.

On the day of Stone’s arrest, the juror linked to an article about Mueller’s investigation along with the words “Brought to you by the lock her up peanut gallery,” referring to “lock her up” chants by Trump supporters in 2016 about Clinton.

There has rarely been a juror so tainted as the forewoman in the Roger Stone case. Look at her background. She never revealed her hatred of “Trump” and Stone. She was totally biased, as is the judge. Roger wasn’t even working on my campaign. Miscarriage of justice. Sad to watch!

Hart told the judge that there was nothing about what she’s heard or read about Stone that would affect her ability to judge him fairly. She said she couldn’t recall anything specifically she’d heard or read.

“So I recall just hearing about him being part of the campaign and some belief or reporting around interaction with the Russian probe and interaction with him and people in the country, but I don’t have a whole lot of details. I don’t pay that close attention or watch C-SPAN,” she said, according to a court transcript.

Hart’s Twitter account was full of posts about the special counsel’s investigation, including a retweet of a January 2019 post from a CNN contributor that attempted to downplay allegations that the FBI’s raid on Stone’s house wasn’t warranted.

However, Jackson ruled that Hart’s opinions about the president did not mean she was biased against Stone.

“At bottom, the defense merely posits that if you do not like Donald Trump, you must not like Roger Stone, or if you are concerned about racism on the part of some of the President’s supporters, then you must be applying that label to Roger Stone because he was a supporter, too,” Jackson wrote in the opinion.

“While the social media communications may suggest that the juror has strong opinions about certain people or issues, they do not reveal that she had an opinion about Roger Stone, which is the opinion that matters.”

“The assumption underlying the motion—that one can infer from the juror’s opinions about the president that she could not fairly consider the evidence against the defendant—is not supported by any facts or data,” she wrote.