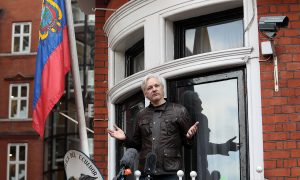 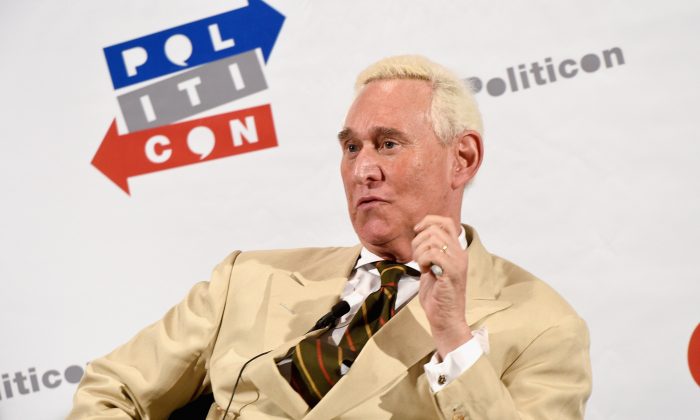 Roger Stone during Politicon at the Pasadena Convention Center in Pasadena, Calif., on July 29, 2017. (Joshua Blanchard/Getty Images for Politicon)
US

Stone served briefly as an adviser to the Trump campaign in 2015 before being fired by then-candidate Donald Trump in August that year. Stone, who asserted that he resigned from the campaign, continued supporting Trump throughout 2016.

The special counsel alleges that Stone lied about his interactions with WikiLeaks to the House Intelligence Committee, according to the indictment (pdf). Stone also attempted to persuade a witness to provide false testimony and withhold information from the committee, the prosecutors said.

Starting in August 2016, Stone began claiming privately and publicly that he was communicating with WikiLeaks. In mid-August, WikiLeaks denied communicating with Stone. According to the indictment, Stone continued to speak publicly and with the Trump campaign about potential future releases by WikiLeaks.

From July 22, 2016, onward, WikiLeaks published troves of emails stolen from the Democratic National Committee (DNC) and the Democratic Congressional Campaign Committee. The publication exposed that the DNC, which is supposed to be neutral to its candidates, developed an animus against Bernie Sanders. DNC Chairwoman Debbie Wasserman Schultz announced her resignation shortly after the emails became public.

In the indictment, the special counsel alleges that Stone communicated with the Trump campaign and told campaign officials that WikiLeaks “had documents whose release would be damaging to the Clinton Campaign.” The indictment does not specify whether Stone’s communications occurred before or after the initial WikiLeaks release on July 22, alleging instead that he informed campaign officials “by in or around June and July 2016.”

The indictment details Stone’s communications about WikiLeaks but does not show whether Stone’s predictions about future releases were based on educated guesswork or actual intelligence he received from his associates.

According to the indictment, on Oct. 7, after WikiLeaks released emails stolen from Clinton-campaign chairman John Podesta, a high-ranking Trump campaign official emailed Stone to say “Well done.” Stone went on to boast that he had correctly predicted the Oct. 7 release.

In the months following the election, House and Senate intelligence committees opened investigations into whether Russia interfered with the 2016 election. Stone testified before the House Intelligence Committee on Sept. 26, 2017. According to the indictment, Stone lied to lawmakers about not having any documents or communications concerning the hacked emails and WikiLeaks.

“So you have no emails to anyone concerning the allegations of hacked documents … or any discussions you have had with third parties about Julian Assange?” the committee asked Stone.

“That is correct,” Stone said. “Not to my knowledge.”

According to special counsel, Stone had dozens of text messages pertinent to that inquiry when he made that statement.

The prosecutors also charged Stone for lying to the committee about his public statements in early August 2016, his attempt to reach out to WikiLeaks, as well his communications with an intermediary, and the Trump campaign.

Mueller also alleges that Stone attempted to persuade another witness, radio host Randy Credico, to provide false testimony to the committee. According to the indictment, Credico initially pushed back against Stone’s attempts, telling Stone that his testimony was false and that he should correct it.

After the committee contacted Credico for testimony, Stone attempted to persuade Credico to either claim not to remember specific facts or to assert the Fifth Amendment right against self-incrimination.

“‘Stonewall it. Plead the fifth,” Stone wrote in a text message to Credico.