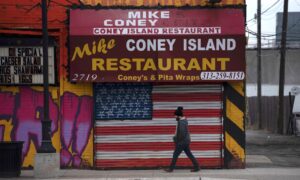 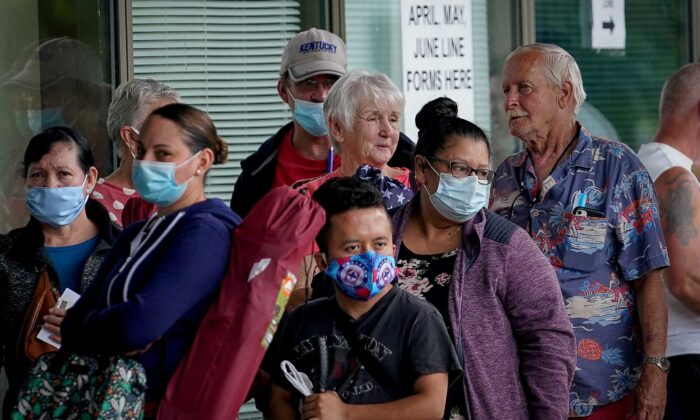 People line up outside a Kentucky Career Center hoping to find assistance with their unemployment claim in Frankfort, Kentucky, on June 18, 2020. (Bryan Woolston/Reuters)
Economies

Fewer Americans sought unemployment benefits last week, but the modest drop did little to dispel concerns that the U.S. job market and wider economy face an arduous recovery from the devastation inflicted by the coronavirus pandemic in 2020.

The final major economic data point for a year that saw a recession of historic magnitude erupt out of nowhere stood as a fitting reminder for both how far the recovery has progressed and how much more it has to go.

While new claims for benefits reported by the U.S. Labor Department on Dec. 31 dropped for the second week in a row to a seasonally adjusted 787,000 in the week ended Dec. 26, from 806,000 a week before, it left them at roughly the level they were three months ago and with little indication that they would show material improvement any time soon.

The arrival of effective COVID-19 vaccines and additional federal pandemic aid have set the stage for a brighter 2021. But economists agree the still-raging epidemic and the fractured government response to it means more difficult months ahead before improvement takes hold.

“While prospects for the economy later in 2021 are upbeat, the economy and labor market will have to navigate some difficult terrain between now and then and we expect claims to remain elevated,” Nancy Vanden Houten, lead U.S. economist at Oxford Economics, said in a note.

COVID-19’s unexpected appearance late last year and rapid spread in early 2020 brought an abrupt end to a record-long U.S. economic expansion that had fostered the strongest job market in generations. It also brought down the global economy, dashing hopes for a second straight decade of uninterrupted growth and widening prosperity.

The report also showed that as of the middle of last month, more than 19.5 million people were receiving some form of jobless aid, including from emergency measures extended by the latest coronavirus aid bill that was passed by Congress and signed by President Donald Trump. Those emergency programs now account for roughly two-thirds of all ongoing jobless assistance.

As of Dec. 19, 2020, the number of people continuing to draw benefits under regular state unemployment insurance programs declined to 5.219 million, the lowest since March, from 5.322 million the week before. Economists took little solace from that decline, however, seeing it more the result of people exhausting benefits rather than finding new work.

The elevated level of claims aligns with other recent weak economic reports, including a decline in consumer confidence to a four-month low in December and drops in both consumer spending and income last month.

With persistently high COVID-19 infection levels forcing renewed restrictions on businesses and consumer activity around the country, some economists now see a chance that overall U.S. employment has fallen this month for the first time since April, when 20.8 million people lost jobs in a single month.

While payrolls have risen each month since then, the total level of employment remains roughly 10 million jobs below its pre-pandemic level.

Aneta Markowska, chief financial economist at Jefferies, said the company’s in-house economic activity index, which tracks the recovery through high-frequency measures, has fallen to a three-week low, led by weakness in measures of consumer spending and employment.

“Taken at face value, our data suggest further downside for retail sales and raise the prospect of an outright contraction in December employment,” Markowska wrote. “However, with more fiscal stimulus on the way, we expect the negative momentum to reverse in January.”

The Labor Department will issue December’s employment data on Jan. 8, 2021.

The latest report’s end date—Dec. 26—was when as many as 14 million people were set to lose jobless benefits provided by a $3 trillion pandemic relief bill enacted in the spring. That was a cliff that lawmakers had raced to avoid by passing a nearly $900 billion supplemental package in the days before Christmas, including $600 payments to most individuals and extensions of unemployment benefits and eviction moratoriums.

Trump, however, railed against the deal negotiated by his own Treasury secretary, demanding higher payments to individuals, and did not sign it into law until Jan. 3 after pressure from senior lawmakers in his Republican Party.

It was unclear whether that lapse had a material effect on last week’s data or what effect it might have on the level of claims in the current week and into the new year.

“The new stimulus package is a life preserver, but containing the virus is the only way to completely end the economic chaos,” AnnElizabeth Konkel, economist at Indeed Hiring Lab, said in a note. “Even then, a full recovery will have to clear the hurdle of mounting long-term joblessness.”