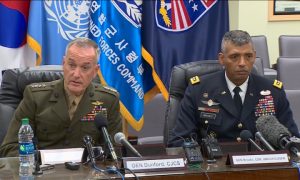 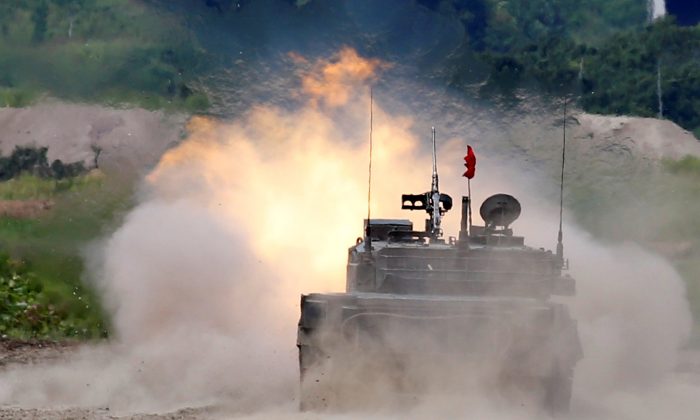 TOKYO—Japanese jets conducted air manoeuvres with U.S. bombers southwest of the Korean peninsula on Wednesday as North Korea considered whether to fire missiles towards the U.S.-administered territory of Guam.

Reclusive North Korea has made no secret of its plan to develop a missile capable of firing a nuclear warhead at the United States to counter what it perceives as constant U.S. threats of invasion.

It has ignored warnings from the West and from its lone major ally, the Chinese regime, to halt its nuclear and missile tests which it conducts in defiance of U.N. Security Council resolutions.

“These training flights with Japan demonstrate the solidarity and resolve we share with our allies to preserve peace and security in the Indo-Asia-Pacific,” the U.S. Air Force said in an announcement.

The U.S. aircraft, which were designed to carry nuclear bombs and later switched to conventional payloads, have flown several sorties in East Asia over recent weeks. In addition to air drills with Japanese fighters, the bombers have also exercised with South Korean aircraft.

North Korea regards the U.S. exercises with South Korea and Japan as preparations to invade it.

The exercises also upset the Chinese regime, which says they do nothing to ease tension.

On Wednesday, a senior Chinese military officer reiterated the Chinese regime’s position on the need to maintain peace and stability to the United States’ top general, chairman of the U.S. Joint Chiefs of Staff Joseph Dunford, China’s Defence Ministry said.

Song Puxuan, commander of China’s Northern Theatre Command, stressed to Dunford that the North Korean nuclear issue must be resolved politically through talks, the ministry added, without saying where the two met.

The command is based in China’s northeastern city of Shenyang and has responsibility for a swath of northern China, including the border with North Korea.

North Korean leader Kim Jong Un has delayed a decision on firing missiles towards Guam and U.S. officials have since taken a gentler tone, but tension in the region nonetheless remains high.

The North Korean threats had prompted U.S. President Donald Trump to say the U.S. military was “locked and loaded” if North Korea acted unwisely. Those words in turn prompted a warning from China for both sides to tone down the rhetoric.

North Korea has often threatened to attack the United States and its bases in the region and it is likely to be infuriated by the current manoeuvres and annual U.S.-Japanese drills next week.

In his first public appearance in about two weeks, Kim on Monday inspected the command of North Korea’s army, examining the plan to fire four missiles aimed at landing near Guam, the official KCNA news agency reported.

“He said that if the Yankees persist in their extremely dangerous reckless actions on the Korean peninsula and in its vicinity, testing the self-restraint of the DPRK, the latter will make an important decision as it already declared,” KCNA said.

Wednesday’s air exercise took place close to Japanese-controlled islets in the East China Sea which are also claimed by the Chinese regime. The uninhabited territory is known as Senkaku in Japan and Diaoyu in China.

While the United States has declined to take sides in the dispute over the tiny islands, it nonetheless has said it would defend them from attack under its security alliance with Japan.

Chinese Foreign Minister Wang Yi, in a telephone conversation with Sigmar Gabriel, Germany’s minister for foreign affairs, said tension on the Korean peninsula was showing some signs of easing but had not passed.

The parties involved should “make a correct judgment and wise choice by taking a responsible attitude toward history and people”, Wang said, according to a statement on his ministry’s website.