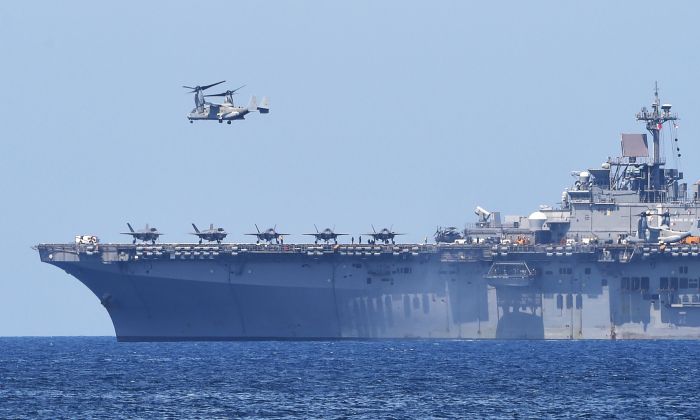 US Indo-Pacific Commander: China Is Assaulting International Rules of Order

U.S. Commander Admiral Philip Davidson gave an interview from his Indo-Pacific Command headquarters to state that China is assaulting the international rules of order.

Command of the sea is recognized as the foundation of American national security. The U.S. military officer responsible for 52 percent of the planet is Admiral Phillip Davidson. As Indo-Pacific Commander, he directly leads the 375,000 U.S. military and civilian personnel associated with the U.S. Pacific Fleet that consists of about 200 ships, including five aircraft carrier strike groups, two Marine Expeditionary Forces, nearly 1,100 aircraft, and a numerous Special Operations groups.

Davidson granted Breaking Defense an official interview at his Command Headquarters office in Honolulu, Hawaii on July 17, to provide further insight into the U.S. Defense Department white paper titled ‘Indo-Pacific Strategy Report’ released on June 1. The report for the first time labeled “The People’s Republic of China as a Revisionist Power” that under the leadership of the Chinese Communist Party (CCP), “undermines the international system from within by exploiting its benefits while simultaneously eroding the values and principles of the rules-based order.”

Responding to Breaking Defense’s concerns that the white paper may have signaled the launch of a “New Cold War” containment policy against China, Admiral Davidson agreed that the People’s Republic of China (PRC) must now be called out for discriminating against minority groups at home, engaging in cyber-theft of intellectual property, illegally claiming sovereignty over the South China Sea, and seeking to militarize outer space.

Davidson emphasized the current policy is not to “contain” China the same way America contained the Soviet Union; the United States would rather encourage China to prosper and lift its people out of poverty. But the “international order is now under assault by China“ and the United States views this as representing a “fundamental divergence of values.”

The most visible examples of that divergence are China’s “militarization of a number of man-made islands in the South China Sea in defiance of international tribunals;” mistreating the Muslim Uyghurs in Western China; and protests by people in Hong Kong.

The worst may be “predatory economic policies behind China’s ‘One Belt, One Road’ initiative, which ignores WTO rules on transparency and corruptly entices countries into a debt trap that forces them to trade their sovereignty in order to avoid a debt default.”

Davidson suggested that regarding China’s military modernization, “I do think it’s fair to say that China has gone to school on the ‘American way of war.’” The Chinese are not only modernizing equipment, but “the global structure of bases they are assembling” in the Western Pacific is mimicking the U.S. Navy’s entire joint military capability.

Davidson views China’s progress in space as profound: “Back in 2000, China only had 10 satellites in orbit, and this year it will launch more satellites than any other nation on the planet. That will greatly improve China’s capabilities in terms of communications, surveillance, and offensive space systems possibly threatening our space assets.”

The Department of Defense issuing the white paper and offering Admiral Davidson for an official interview regarding the evolving PRC military threat seemed structured to send a message to the American people that “the old strategy presuming that China would liberalize as it was integrated more closely into the rules-based international order has simply not worked.”