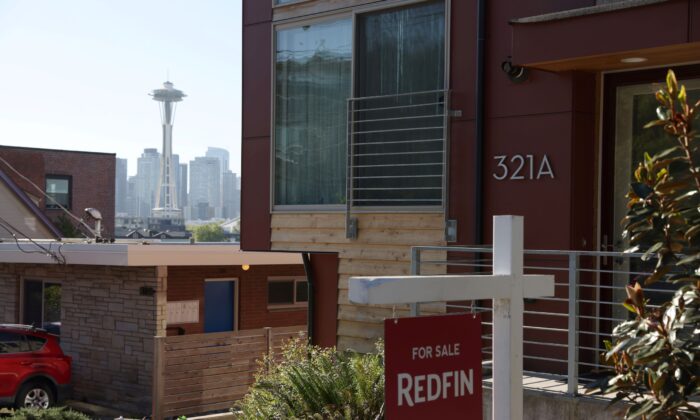 A "For Sale" sign is posted outside a residential home in the Queen Anne neighborhood near the Space Needle in Seattle, Washington on May 14, 2021. (Karen Ducey/Reuters)
Economy

WASHINGTON—U.S. homebuilding unexpectedly fell in September and permits dropped to a one-year low amid acute shortages of raw materials and labor, strengthening expectations that economic growth slowed sharply in the third quarter.

The report from the Commerce Department on Tuesday also showed housing completions hitting a 13-month low. It followed on the heels of news on Monday that production at U.S. factories fell by the most in seven months in September. Strong demand as global economies emerge from the COVID-19 pandemic is running against worker shortages, straining supply chains.

In the United States, every industry is experiencing shortages, fanning inflation.

“Momentum in demand still appears to be positive,” said Rubeela Farooqi, chief U.S. economist at High Frequency Economics in White Plains, New York. “But supply is struggling to catch up given higher input costs and shortages that remain headwinds for builders.”

Economists polled by Reuters had forecast starts would rise to a rate of 1.620 million units. Lumber prices are rising again after tumbling from record highs set in May. Building materials, like windows and electric breaker boxes, are in short supply. The pandemic has upended labor market dynamics.

Starts have declined from the 1.725 million unit-pace level scaled in March, which was more than a 14-1/2-year high.

Single-family starts, which account for the largest share of the housing market, were unchanged at a rate of 1.080 million units last month. Single-family starts fell in the Northeast and the densely populated South, but rose in the West and Midwest.

Starts for buildings with five units or more dropped 5.1 percent to a rate of 467,000 units last month.

A survey from the National Association of Home Builders on Monday showed confidence among single-family homebuilders rising further in October, but noted that “builders continue to grapple with ongoing supply chain disruptions and labor shortages that are delaying completion times.”

Residential investment contracted in the second quarter after three straight quarters of double-digit growth. It likely declined further in the last quarter. The Atlanta Federal Reserve is estimating that gross domestic product growth braked to a 1.2 percent annualized rate last quarter. The economy grew at a 6.7 percent pace in the second quarter.

The housing market was boosted early in the coronavirus pandemic by an exodus from cities to suburbs and other low-density locations as Americans sought more spacious accommodations for home offices and online schooling.

That tailwind is ebbing as workers return to offices and schools reopened for in-person learning, thanks to COVID-19 vaccinations. High inflation is also lifting mortgage rates.

The 30-year fixed mortgage rate rose to an average of 3.05 percent last week from 2.99 percent in the prior week, according to data from mortgage giant Freddie Mac. Though still low by historical standards, rising borrowing costs could make homeownership less affordable for some first-time buyers. House prices notched record double-digit growth on an annual basis in July.

The inventory of previously owned homes is near record lows, leading to record double-digit annual growth in home prices.

Realtors estimate that single-family housing starts and completion rates need to be in a range of 1.5 million to 1.6 million units per month to close the inventory gap.