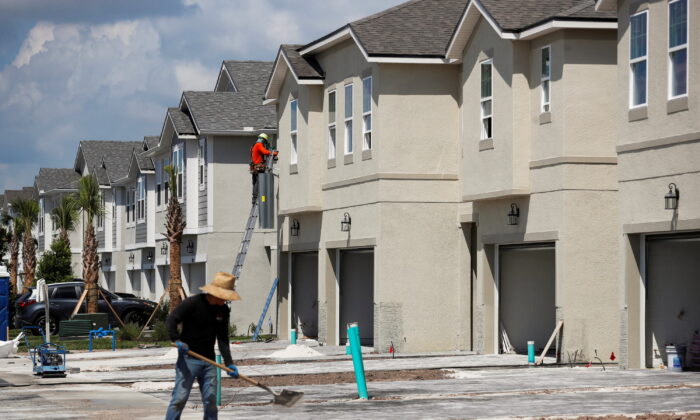 A carpenter works on building new townhomes while building material supplies are in high demand in Tampa, Fla., on May 5, 2021. (Octavio Jones/Reuters)
Economy

US House Prices to Rise Another 10 Percent This Year: Reuters Poll

U.S. house prices are set to climb in double digits this year even as the Federal Reserve embarks on its expected series of interest rate hikes, according to a Reuters poll of property analysts who forecast a sellers’ market for another two years.

Record low interest rates and a scarcity of homes to buy, combined with unexpectedly explosive demand during the pandemic, sent the average house price up 17 percent last year, the strongest annual rise in at least two decades.

That has stretched affordability ever further, particularly for aspiring new homebuyers, a common theme across most developed economies as the global economy emerges from the worst of COVID-19 and central banks raise interest rates.

The Feb. 8–28 poll of 33 property analysts suggested U.S. house prices would rise 10.3 percent this year. That was an upgrade from 8.0 percent in the December poll, suggesting underlying demand for housing is still strong and housing supply is still tight.

Prices are forecast to rise 5.0 percent next year and 4.1 percent in 2024, marginal upgrades compared with 4.0 percent and 3.7 percent in the last poll.

Predictions are based on the Case/Shiller index.

Russia’s invasion of Ukraine and the ensuing conflict has injected some caution into interest rate expectations, which could keep 30-year mortgage rates lower and in turn may leave the near-term trend largely intact.

“The expectation is for the rate of increase to slow to a pace closer to the pace of income growth of households made up of people who are in their late 20s and early 30s. The millennials are driving the surge in demand for single-family homes. There is, however, very little risk that home prices will decline in this cycle.”

When asked what federal funds rate would bring about a significant slowdown in the housing market this year, analysts returned a median of 1.75 percent. That is 50 basis points above where a separate Reuters poll predicted it to end 2022, at 1.25 percent, and also well above money market pricing.

“We consider a funds rate above 2 percent to be restrictive, a rate that would slow economic growth and probably dampen housing activity,” Nancy Vanden Houten, lead U.S. economist at consultancy Oxford Economics, said.

In the meantime, house prices are set to keep climbing.

A like-for-like analysis showed 12 of 18 analysts had upgraded their predictions from the December poll. While four kept them unchanged, two analysts downgraded them.

Roughly 57 percent of analysts, or 17 of 30, predicted double-digit house price rises this year, nearly double the 30 percent in the last poll. All but one of 27 analysts said it would remain a sellers’ market this year and will only turn in 2024.

Already at historic lows, housing inventory levels are likely to worsen as rising input costs encourage builders to build more expensive homes where profit margins are better than the starter homes which are in such high demand.

Existing home sales, which make up about 90 percent of total sales, were expected to average a little over 6 million annualized units this year, around where they have been over the past 19 months.

Asked to rate U.S. house prices on a scale of 1 to 10 where 1 was extremely cheap and 10 extremely expensive, analysts who in most Reuters polls since 2017 had rated it 7 or below nudged the median assessment higher in the latest survey to 8.

By Hari Kishan and Sarupya Ganguly