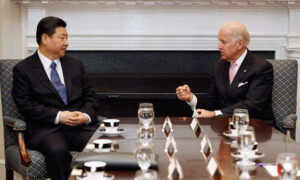 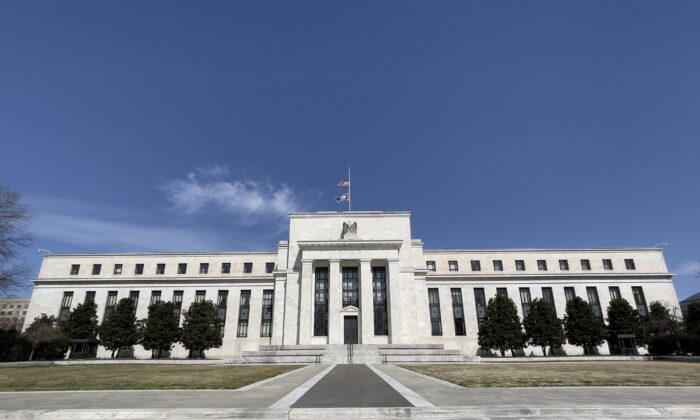 The Federal Reserve building is seen on March 19, 2021 in Washington, DC. - Mortgage rates are finally ticking up in the United States, one year after the Federal Reserve cut its lending rate to boost the economy as the Covid-19 pandemic arrived, but that's not expected to cool the hot housing market. (Photo by Daniel SLIM / AFP) (Photo by DANIEL SLIM/AFP via Getty Images)
US News

WASHINGTON—Financial regulators around the world are rushing to implement models to measure the financial risk arising from climate change. Central banks including the Federal Reserve may soon begin to implement climate stress tests of banks, which may limit financing for industries such as mining, oil, and gas.

The world’s largest central banks are pondering how to promote green financing, as they seek to introduce regulatory frameworks to “mobilize” more money for green and low-carbon investments.

Critics, however, argue that the proposals to introduce climate stress tests aim to “defund the fossil fuel industry” and steer funds to “fashionable but unprofitable investments.”

Stress testing, developed after the Great Recession, is a process by which central banks determine whether a financial institution has enough capital to weather various economic risks.

The European Central Bank (ECB) is one of the pioneers in investigating and deploying concrete plans to address climate risk. The bank is currently piloting a framework for climate stress tests that involves 2,000 banks in the euro area and is planning to publish the result of its exercise in July.

Speaking at a webinar hosted by the ratings firm Moody’s on May 6, Carmelo Salleo, head of stress test modeling division at the ECB, said that modeling financial risk derived from climate risk is still “in its infancy” and there’s a lack of consensus among experts on how to develop the model.

Hence, the scientists at the ECB “had to start from scratch” and do all the steps from finding the relevant data to thinking of different ways to model it, he said.

“But the good news is, it can be done with some investment,” he said.

The purpose of the stress test modeling is to identify climate-related physical and transition risk factors facing banks and companies.

Physical risk refers to costs that arise from extreme weather events such as floods and wildfires. And transition risk is defined as financial risk arising from policy changes in the process of moving towards a low-carbon economy.

According to Salleo, increasing carbon taxes, for example, would affect some companies disproportionately and that generates financial risk for these firms.

The Bank of England announced last year that it would implement its first climate stress test on financial institutions in June. The test will require banks and insurance firms to determine whether they have enough capital levels to mitigate potential losses from climate change.

The developments in Europe have encouraged U.S. regulators to explore ways to mitigate climate-related risks facing the U.S. financial system.

Following the November 2020 presidential election, the Federal Reserve declared climate change as a potential threat to financial stability and formally joined the Network of Central Banks and Supervisors for Greening the Financial System. The network, established three years ago, promotes green finance and aims to develop recommendations for central banks “to manage risks and to mobilize capital for green and low-carbon investments,” according to its website.

The group has more than 100 members and observers, including the People’s Bank of China, the ECB, and the International Monetary Fund.

Speaking at the webinar, Emilie Mazzacurati, global head of Moody’s climate solutions said that there is a significant push in the United States to incorporate climate change risk into bank oversight.

“We’ve seen very strong signals from the Biden administration, that climate is one of the top priorities,” Mazzacurati said.

“We’ve also seen a lot of strong signals from the different financial supervisory agencies, including the Fed. So I expect that this is a space that is going to move very fast in the U.S. going forward.”

In January, the U.S. central bank created a “Supervision Climate Committee” to study potential implications of climate change for financial institutions and markets.

Critics, however, fear that the financial regulators could “weaponize” their authority to force banks and private companies to defund fossil fuel industries.

A group of Republican lawmakers sent a letter in December to the Fed, raising concerns about the central bank potentially introducing climate-related stress tests for banks.

“We urge you not to entertain implementation of such [climate related] scenarios without due consideration of their methodological shortcomings and challenges,” the group stated in the letter.

They cited shortcomings of frameworks introduced by some European regulators and urged not to mirror the paths they took.

According to John Cochrane, an economist at the Hoover Institution at Stanford University, the Fed and other central banks “are rushing to take on climate change.”

“Yes, we are decarbonizing the economy, but similar transitions from horses to cars, from trains to planes, or from typewriters to computers did not cause even a blip in the financial system. Companies and industries come and go all the time,” Cochrane wrote in an article in City Journal.

“So why is there pressure for financial firms to ‘disclose’ absurdly fictitious ‘climate risks’ and change investments to avoid them? Clearly, these proposals aim to defund the fossil fuel industry before alternatives are in place and to steer funds to fashionable but unprofitable investments by regulatory subterfuge.”