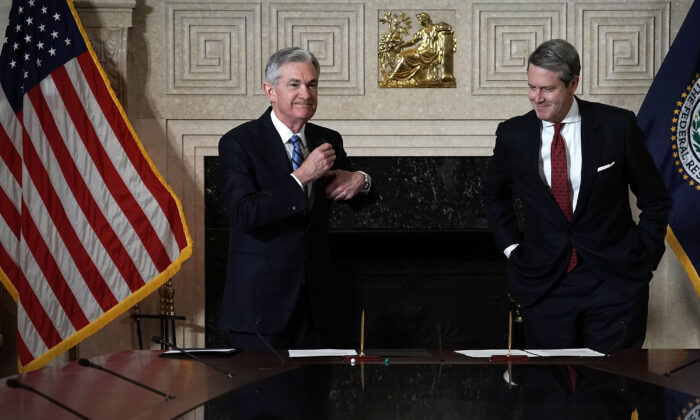 GOP Lawmakers Warn Fed Against Greening of US Banking System

WASHINGTON—Soon after the November 2020 presidential election, the Federal Reserve declared climate change as a potential threat to financial stability and joined a network that advocates for using levers of financial regulation to address climate change.

A group of Republican lawmakers is among critics who argue that central banks should not “weaponize” their authority to force banks and private companies to defund fossil fuel industries for political purposes.

The Federal Reserve Board announced on Dec. 15, 2020, that it formally joined the Network of Central Banks and Supervisors for Greening the Financial System (NGFS), which was established three years ago. The NGFS promotes green finance and aims to develop recommendations for central banks “to manage risks and to mobilize capital for green and low-carbon investments,” according to its website.

The group has nearly 100 members and observers, including the People’s Bank of China, the European Central Bank (ECB), and the International Monetary Fund.

The Fed’s move came after the bank recognized climate change as a systemic risk for the first time in its biannual financial stability report released in November. The Fed hasn’t yet proposed a framework to address climate change but said it expects “banks to have systems in place that appropriately identify, measure, control, and monitor” all material risks, including climate risks.

Republicans fear that the Biden administration and climate activists could use financial regulation as a back door to achieve their policy objectives. Hence, they’re concerned that the Fed’s decision to join the climate network could further politicize access to capital and choke off bank financing for sectors such as coal, oil, and gas.

“The weaponization of financial regulation, including some of the recommendations from the NGFS, jeopardizes access to capital for businesses lawfully operating in the United States,” Rep. Andy Barr (R-Ky.) told The Epoch Times in an email.

“The assault by the Biden Administration on the energy industry is a threat to jobs and households’ energy costs in a time of widespread economic uncertainty,” he said.

Stress testing, developed after the Great Recession, is a process by which central banks determine whether a financial institution has enough capital to weather various economic risks.

“We urge you not to entertain implementation of such [climate related] scenarios without due consideration of their methodological shortcomings and challenges,” the group stated in the letter.

They cited shortcomings of frameworks introduced by some European regulators, including the Bank of England, and recommended not to mirror the paths they took.

“Unfortunately, those suggested paths forward are plagued with speculation, inconsistencies, and reliance on long-term projections,” they said.

The Republican lawmakers also warned against “the ill-advised pattern of ‘de-banking’ legally operating businesses” in the coal, oil, and gas sectors, calling them politically motivated decisions.

“It is possible that the introduction of climate change stress tests could perpetuate this trend,” the letter said.

The European Central Bank (ECB) is in the process of preparing guidelines for financial institutions. While the guidelines won’t be legally binding, the ECB expects banks to identify and manage climate-related and environmental risks and disclose such risks transparently.

The Bank of England will be the pioneer in greening the financial system as it plans to implement its first climate stress test on financial institutions in June. The climate stress testing will require banks and insurance firms to determine whether they have enough capital levels to mitigate potential losses from climate change.

The Federal Reserve hasn’t implemented any such steps but it is still “evaluating and investing” in ways to better understand the potential effects of climate change on U.S. banks, the Fed said in response to the letter by the GOP members.

The Fed’s response letter obtained by The Epoch Times stated that the central bank’s existing stress test for large banks examines “capital adequacy over a time horizon much shorter than the time horizon over which the effects of climate change are likely to manifest,” indicating the difficulty in appropriately measuring climate-related risks.

The Fed also noted that its climate risk analysis is “new and evolving” but ensured that the Fed policymakers would take a “careful, thoughtful, and transparent approach to this work.”

“The Federal Reserve will not implement in the United States any recommendations of the NGFS that are not in the best interest of the U.S. financial system,” the letter said.

The Fed’s decision to join the climate network came amid Democrats’ calls for regulators to conduct stress tests on financial institutions and reduce lending to climate-exposed sectors.

“And if temperatures rise to 4°C above preindustrial levels over the next 80 years, global economic losses could exceed $20 trillion per year—inflicting unprecedented and likely permanent economic damage on a global scale,” the Democrats warned.

The environmentalists argue that the relationship between the financial sector and the climate crisis is often overlooked. In recent years, top investment banks and investment firms have begun to put environmental sustainability at the center of their business plans to avoid criticism from activists.

BlackRock, the world’s largest money manager, with more than $8.6 trillion assets under management, has been committed to cutting investments in fossil-fuel stocks.

“More and more financial regulators are making climate risk disclosure mandatory, central banks are stress testing for climate risk, and policymakers around the world are collaborating to achieve common climate goals,” Fink wrote in his 2021 letter to clients.

Frank Elderson, chair of the NGFS and member of the ECB’s executive board, welcomed the Fed’s decision to join the climate network.

The network has ambitious goals and its job is “far from finished,” Elderson said in a statement on Dec. 15, 2020.

“We must still press on with our collective efforts to ensure we reach net-zero emissions and address the risks the climate crisis poses to the financial system,” he said.

Not everyone is supportive of central banks’ embarking on climate agenda.

According to Ike Brannon, economist and president of Capital Policy Analytics, the Fed will likely introduce climate-change scenarios to its stress testing of financial institutions.

“I don’t think this would have much of a short-run impact since the short-run impact of climate change isn’t that worrisome, but its long-run ramifications could be bigger,” Brannon told The Epoch Times.

“This is a long-term goal of many who advocated that [the Fed] take this step, but I think they have designs that go beyond climate change.

“Creating a system whereby the government can use its financial regulatory power to direct the economy away from businesses and industries it disapproves of is very much a goal of many Democrats in Congress and the administration.”

According to John Cochrane, an economist at the Hoover Institution at Stanford University, the Fed and other central banks “are rushing headlong into climate policy.”

“This is a mistake. It will destroy central banks’ independence, their ability to fulfill their main missions to control inflation and stem financial crises, and people’s faith in their impartiality and technical competence. And it won’t help the climate,” he stated in a report.