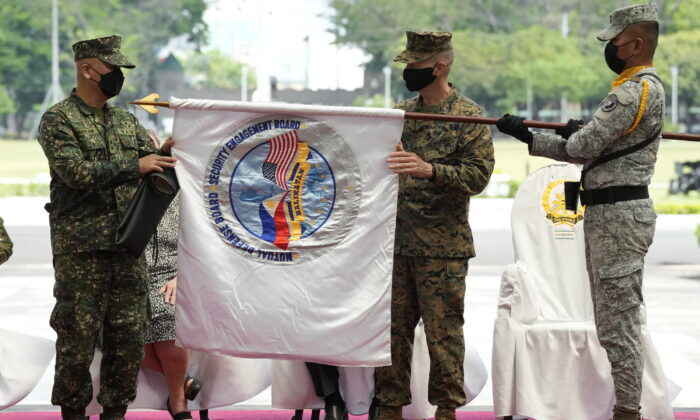 MANILA, Philippines—Thousands of American and Filipino forces began on Monday one of their largest combat exercises in years that will include live-fire maneuvers, aircraft assaults, urban warfare, and beach landings in a showcase of U.S. firepower in the northern Philippines near its sea border with Taiwan.

The Chinese regime will likely frown on the war drills given their relative proximity to Taiwan, which it claims as Chinese territory, but organizers said the exercises don’t regard any particular country as a target. Taiwan is a de facto independent country, with its own military, democratically-elected government, and constitution.

“The U.S. military and Armed Forces of the Philippines will train together to expand and advance shared tactics, techniques, and procedures that strengthen our response capabilities and readiness for real-world challenges,” said Maj. Gen. Jay Bargeron, the U.S. 3rd Marine division’s commanding general. “Our alliance remains a key source of strength and stability in the Indo-Pacific region.”

First staged in 1991, the Balikatan exercises are anchored on the 1951 Mutual Defense Treaty, which commits the United States and the Philippines to come to the aid of the other in case of an attack. The allies aim to be strong and seamlessly braced for any security contingency as a deterrence against war. “It’s for mutual defense, never for offense,” Philippine military spokesman Col. Ramon Zagala said.

The treaty alliance “declares formally our sense of unity and determination to mutually defend against external armed attack, so that no potential aggressor could be under the impression that either of them stands alone,” Zagala told The Associated Press.

But the governor of northern Cagayan province, where amphibious landings with limited live-fire maneuvers were scheduled to be held in the coastal town of Claveria this week, has opposed any joint exercise utilizing gunfire, fearing it could antagonize the Chinese regime.

“The military consulted and asked me, but I said I cannot allow any live-fire exercise. Any exercise is OK, but live-fire,” Cagayan Governor Manuel Mamba told The AP by telephone. “We have to engage China, but not in a war, because I know Taiwan is a powder keg.”

China, along with the United States and Taiwan, has expressed interest in investing in Cagayan, which has an underdeveloped agriculture and related industries, Mamba said, adding “I’m not pro-China, I’m pro-Cagayan.”

A Philippine military official said the beach landing exercises would proceed in Claveria without any live-fire training, which will be held instead at Crow Valley, an aircraft gunnery range in Tarlac province further south of Cagayan.

The combat exercises in the northern Philippines are being held amid heightened tensions between Taiwan and China. But Zagala said most of the military maneuvers have been planned a year ago and did not consider the recurring tensions in the Taiwan Strait.

The Chinese regime has been staging threatening exercises and flying military planes near Taiwan’s airspace, including on Feb. 24, when Russia began its invasion of Ukraine.

The United States has consistently expressed its support for ensuring that Taiwan can defend itself, and Chinese military action against the island in the short- to medium-term is generally considered a remote possibility.

Maj. Kurt Stahl of the third U.S. Marine division said that while most combat exercises and humanitarian projects would take place in the country’s north, some maneuvers will be staged on the western island province of Palawan, along with an air defense exercise featuring U.S. and Philippine fighter aircraft around the western side of Luzon.

That region faces the disputed South China Sea, where the Chinese regime’s increasingly aggressive actions, including the building of missile-protected island bases to reinforce its vast territorial claims, have sparked protests from rival claimants like the Philippines and Vietnam, along with condemnation from the United States and its Western and Asian allies.

The large-scale exercises reflect how outgoing President Rodrigo Duterte has walked back on his earlier threat to restrict U.S. military activities in the Philippines. He has nurtured closer ties with the Chinese regime and Russia while often criticizing U.S. security policies.

In July last year, Duterte reversed his termination of a key defense pact with Washington that allows large-scale combat exercises between U.S. and Philippine forces like the Balikatan after the United States provided millions of doses of coronavirus vaccine that he had publicly demanded.

President Joe Biden has said America’s vaccines were being donated to poorer countries at the time to save lives and “don’t include pressure for favors or potential concessions.”