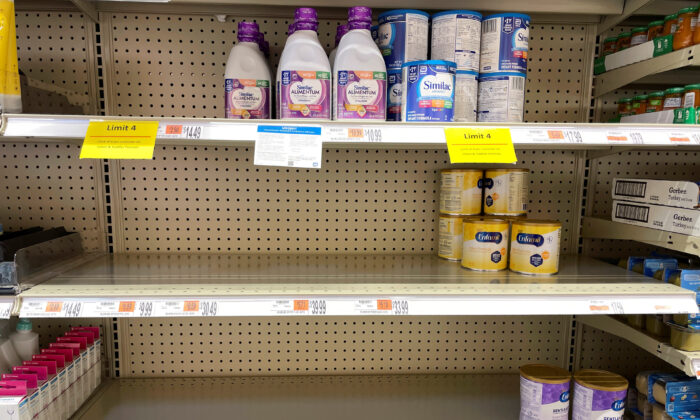 Shelves for baby and toddler formula are partially empty, as the quantity a shopper can buy is limited amid continuing nationwide shortages, at a grocery store in Medford, Mass., on May 17, 2022. (Brian Snyder/Reuters)
Companies

US FDA Working to Allow Overseas Infant Formula Beyond Shortage

The U.S. Food and Drug Administration is looking at ways to allow overseas manufacturers of baby formula to keep selling in the country beyond the current shortage, the health regulator said on Wednesday.

The FDA in May said it would allow baby formula imports until Nov. 14 to ease a shortage that had left parents scrambling to feed their babies.

The agency plans to issue further guidance in September on how companies that have been temporarily allowed to ship baby formula to the United States could meet the agency’s requirements to continue to supply beyond mid-November.

Abbott Laboratories’ last month stopped production of some specialty baby formula in its plant in Michigan due to severe thunderstorms and heavy rains, just days after restarting the plant that has been at the center of the baby formula crisis.

The need to diversify and strengthen the supply chain is more important than ever, the FDA said.

“The recent shutdown of a major infant formula plant, compounded by unforeseen natural weather events, has shown just how vulnerable the supply chain has become,” the agency said.

Abbott had in February recalled infant formula, including Similac, made at the Sturgis, Michigan plant due to reports of bacterial infections in babies.

Before the recall, Abbott controlled 40percent of the infant formula market, but the market share of other companies such as Reckitt Benckiser has grown since the crisis.