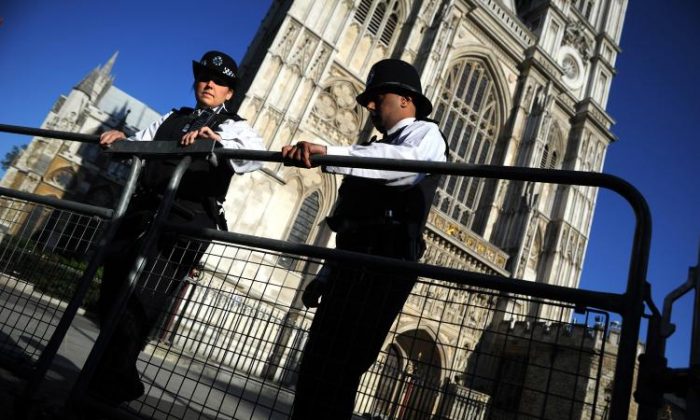 The U.S. Embassy in London warned Americans in the United Kingdom to “keep a low profile” during President Donald Trump’s visit to the country, in case the protests turn violent.

According to a notice posted on the embassy’s website on July 10, “Numerous demonstrations are being planned for July 12 to 14, 2018,” surrounding Trump’s visit. Most of the demonstrations, the alert stated, will be focused in central London on July 13.

Other events are slated to take place on July 12 and July 14. Trump is expected to arrive after a NATO summit in Belgium and will meet with Prime Minister Theresa May, meet Queen Elizabeth at Windsor Castle, and will attend a black-tie dinner at the home of World War ll-era leader Winston Churchill.

“Several of the events are expected to attract large crowds, and there will be road closures in connection with those events,” the embassy said.

Trump is also expected to travel to Scotland, where he owns two golf courses.

The embassy advised Americans in the country to be aware of their surroundings, “keep a low profile,” exercise caution if large gatherings are present, and monitor local media reports for updates.

The large gatherings “may become violent,” the embassy said.

Police sources in the UK told The Guardian that the police mobilization for Trump’s visit will be the largest since the 2011 English riots. “With the hot weather, if anything kicks off, we are struggling. They cut the officers in the urban areas [biggest forces] and now they need them,” one source told the paper.

More than 50,000 people have signed up to demonstrate in London on July 13, Reuters reported.

The warning to Americans comes a few days after the U.S. Embassy in Haiti issued an alert to Americans to “shelter in place” because of riots going on around the country, namely in Port-au-Prince, the capital.

“Do not travel to the airport unless you confirmed your flight is departing,” the embassy said in a statement. “Flights are canceled today and the airport has limited food and water available. … U.S. Embassy personnel are still under a shelter-in-place order.”