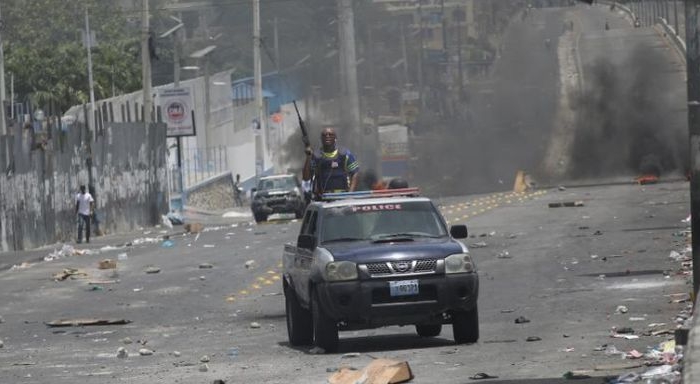 A Haitian National Police car drives next to barricades on a street in Port-au-Prince, Haiti, July 8, 2018. REUTERS/Andres Martinez Casares
US News

The U.S. Embassy in Haiti has warned Americans to “shelter in place” amid violent protests that rocked the nation over the weekend.

The embassy in Port-au-Prince issued the warning on July 8 because of “continuing demonstrations, roadblocks, and violence across Port-au-Prince and throughout Haiti.”

“Do not travel to the airport unless you confirmed your flight is departing,” the embassy said in a statement. “Flights are cancelled today and the airport has limited food and water available. … U.S. Embassy personnel are still under a shelter-in-place order.”

Additionally, Americans in the country are urged to avoid protests and large gatherings of people, to avoid traveling through roadblocks, and to let friends and family know they are safe.

In the violence, which was triggered by anger over rising fuel prices, at least three people have been killed.

Prime Minister Jack Guy Lafontant, after the riots, announced the temporary suspension of double-digit government hikes to prices for gasoline, diesel, and kerosene on July 7.  His office “strongly condemns acts of violence and vandalism perpetrated following the announcement of the price adjustment of petroleum products,” Lafontant wrote on Twitter.

Haiti was forced to implement the hikes at the behest of the International Monetary Fund, which requires the nation to enact a number of austerity measures to strengthen its economy, Reuters reported.

A mission group from central Kentucky that has been working with schools and children is now stranded in Haiti. Debbie Parrish, a parent of one of the group members, told local station WKYT, “My daughter sent me an email saying that they were burning things in the road and burning buildings and the roads were closed, so they would not be able to get to leave.”

She said their group was able to make it to the airport, but their flight was canceled.

“They had to go through several barricades, they’re covered in ash and soot because of all the burning going on there,” she said, adding that the group was able to book another flight for July 9.

A spokesperson for American Airlines told Reuters that it canceled three of seven flights scheduled to stop in Port-au-Prince on July 8. JetBlue also confirmed that flights to Haiti were canceled.